Sen. Mary Camacho Torres’ re-election bid this year marks the 50th anniversary of her dad’s big gamble on the future of Guam politics…

Guam – It’s a political candidacy filing with an historical twist. A member of a leading Republican family on Guam is reminiscing about the good old days and the advent of Guam’s Grand Old Party.

Bringing her children and grandchildren along for the experience, Sen. Mary Camacho Torres (R), filed for her candidacy at the Guam Election Commission a week ago Monday, in a campaign season that marks the 50th anniversary of the Republican Party of Guam. 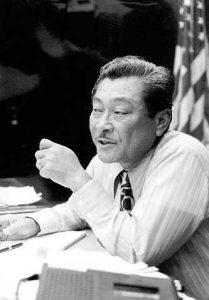 It was 50 years ago, come August, that Torres’s late father, Carlos G. Camacho, led a Guam delegation to the 1968 Republican National Convention in Florida to petition the GOP for an audacious bid at a Republican Party for Guam—and they succeeded! The Territorial Party had been Guam’s leading conservative political group up until that point, but Camacho’s bold move in the mainland was the catalyst to a family tradition that lives strong to this day. And the local political organization’s direct affiliation with the national party connected active Republicans across the vast Pacific in a network of mutual support spanning thousands of miles.

“Shortly after that, my father, I think it was his introduction to the players in the Republican National Committee,” Torres said. “He was called to Washington and he was appointed, at that time we had appointed governors of Guam.

“So it was Richard Nixon who was President at the time, appointed him to be Governor of Guam. But what had occurred shortly before that was the Elective Governors Act, which also called for a popular election on Guam for our own governor in 1970.

“So my father transitioned between being the last [appointed] governor of Guam and then participating in the first popular election for governor and won that election.

“At the time, I was a young girl. I was between the ages of six to nine, but old enough to understand civics, ‘cause that was the time that we were starting to be introduced to civics.

“So, those were exciting times for the family, and times that clearly stayed in my memory. 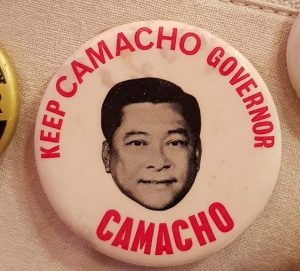 And I wanted my grandkids to have that same type of memory. I think it’s valuable. A lot of those memories that I had of just enjoying having a father who was a senator or having a father who was a governor, it meant a lot, because it meant that you could do things, but you had to have a commitment, you had to have an understanding about your role.”

In 2002, Gov. Camacho’s son, Felix, would follow in his late father’s footsteps when he was elected Guam’s seventh governor. Eventually, Felix’s sister, Mary Camacho Torres, got into the game, being elected senator for the first time in 2014, and then again in 2016. Now she’s in the running for reelection to the 35th Guam Legislature. 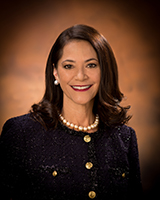 On June 18th, Torres was accompanied by her son, daughter, and grandchildren at GEC while making her reelection bid official. The senator said having younger family members along is a way to symbolically pass the torch of leadership to succeeding generations.

“With my grandchildren, the ones that were with me, they range in age from four to 14,” Torres said. “And I thought it was important for them to be a part of everything.

“Understanding that you can have a role in government needs to be something that’s planted early on, as it was for me.”

And, like Torres has learned from her pioneering father, that sometimes big chances are worth taking for the benefit of all who are inspired by the venture and blessed by its gains.