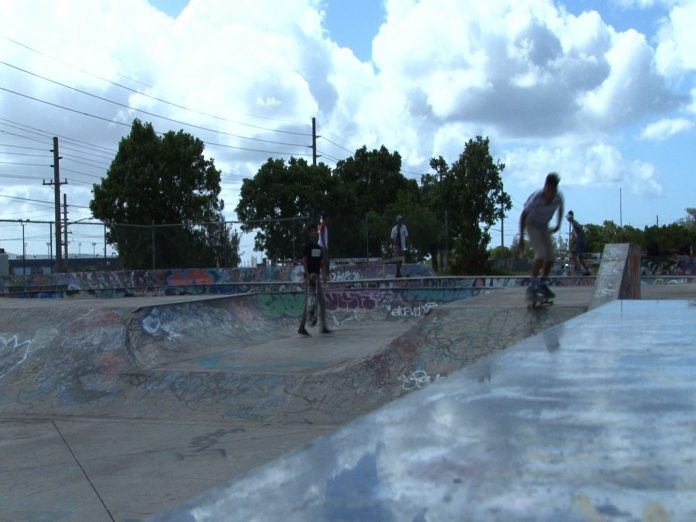 The park was created eight years ago using the community block grant. This is the same grant being used to build a new skate park in Yigo.

Guam – It’s been eight years since the creation of the Dededo Skate Park and the park is deteriorating. With the renovation of the parks bathroom not 30 feet away, some wonder when the actual park will receive much-needed repairs.

The Dededo skate park stands less than a quarter mile from a police substation yet the skaters who use the park do not feel safe. PNC talked with three separate skaters that regularly inhabit the park. Montie Reavill is one of those skaters.

“I would say the biggest issue right now is the lighting, so we only have two of the twelve lights that work and with that only the corners of the park are lit right now  right now,” said Reavill.

On a small level, Reavill says he’s witnessed people walking by, drunk and throwing their glass bottles of alcohol into the park, which endangers the skaters.

“Especially if it’s the clear glass, we hit or well stop and well fly and I’ve seen dudes cut their hands open, a lot of people bring their families here, they bring their kids here, a lot of tourists come here, you know they try to find a way to get away from their dangers. You know they come here and they see glass on the floor and trash everywhere,” said Reavill.

The larger issue however is that the lack of light, broken bottles give the park a “shady” feel and it invites dangerous behaviors. Reavill, Servino and fellow skater Tony Reyes, all agree that a cleaner, better-lit park will do a lot to fix this issue.

Dededo mayor Melissa Savares says that the maintenance and upkeep of the park falls on parks and recreation. But she stresses that the park is a shared responsibility.

“There’s many partners that are here to work together and if we share the responsibility, then of course everybody looks out, we take turns. Being out there to look out for the safety of those that are using it,” said Savares.

As far as the biggest issue, the lights, Savares says they used to fund fixing one or two of the broken lights but she needs help with the lights and the security. Savares tells PNC that there is a bathroom attendant that maintains the restroom just 30 feet away, to Reavill, Servino, and Reyes the logic does not make sense.

“Why would you hire someone to clean the bathroom but not maintain the park, in the sense not the skate park this is a whole thing is the park…this is the main facility pretty much,” says Reavill and Reyes.

The bathroom to the Dededo skate park is 1 of 17 bathrooms that were renovated around Guam.