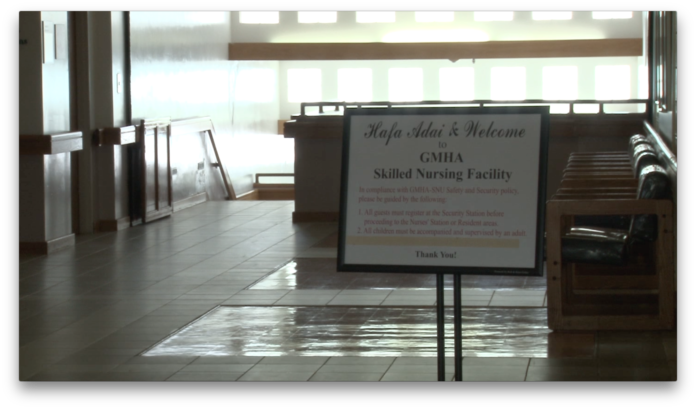 It is not yet clear where the remaining confirmed COVID-19 cases are after this morning’s announcement that one patient, a 68 year old woman, had died at GMH.

Of the 15 confirmed COVID-19 cases reported by the Joint Information Center on Saturday evening, there were 14 remaining as of Sunday morning.

They are all “in stable” condition, said GMH Administrator Lillian Perez-Posadas during a Sunday morning news conference.

When asked for the location of the 14 confirmed cases of COVID-19, COVID-19 Medical Director, Dr. Joleen Aguon and Perez-Posadas both said 4 remain in isolation at GMH.

But officials could not immediately say where the other 10 are.

During the Sunday morning news conference Dr. Cruz said all of the confirmed cases were “kept in isolation, either at GMH or at home temporarily” until the Skilled Nursing Facility in Barrigada Heights was prepared to receive them and that did not happen until Saturday, said Dr. Cruz.

The COVID-19 patients who were “temporarily placed on home isolation” said Dr. Cruz were subject to monitoring by Public Health staff “which included home visits and regular phone calls to check in.”

On Friday, Dr. Lillian Perez-Posadas said that at least one confirmed COVID-19 case had already been transferred to the SNU, and others would follow.

A Joint Information Center release on Saturday stated that patients temporarily in home isolation are now being transported to the Skilled Nursing Facility (SNF).

After the news conference the Governor’s Press Secretary, Krystal Paco-San Austin, responded by saying that the remaining 14 confirmed cases are still in a “mix” of locations.

Some are at GMH, some are in the SNU, she said and some are still in “home isolation to be transferred to (the) SNU.”

The breakdown of how many are in each of those 3 locations was not provided. Nor have officials said when all confirmed cases will be inside the SNU in isolation.

When asked why some confirmed cases were allowed to go home under “self-quarantine,” Paco-San Agustin said: “While in home isolation, they were subject to close monitoring by DPHSS” and “they are being transferred to (the) SNU.”