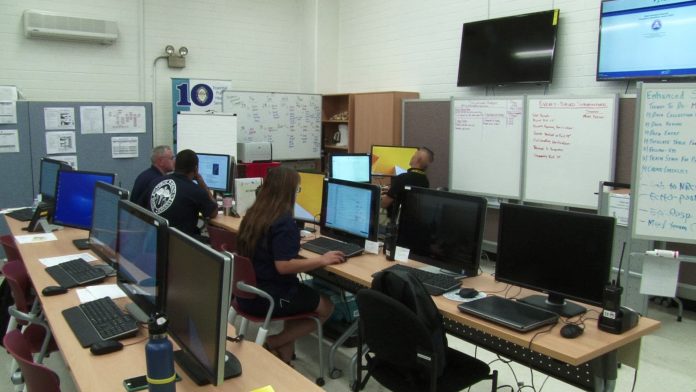 Officials at the syndromic surveillance room produce a daily sentinel report to monitor for any potential outbreaks.

Guam – While the island and our visiting neighbors are out and about enjoying FestPac, there’s a small group of healthcare officials monitoring the island for any potential outbreaks.

In partnership with the Department of Public Health and Social Services, the SPC or Pacific Community has set up what’s called a syndromic surveillance room. In this room, officials are busy monitoring the entire island, with emphasis on FestPac for any potential outbreaks.

“So we’re looking at any infectious diseases that could be of an outbreak potential. So anything from the arboviral diseases, the ones from the mosquitos, to food and water related, to vaccine preventable,” explains epidemiologist Sameer Gopalani.

For example, in their May 24 situational report, 40 syndromes were reported in 7 sentinel sites. Out of the 40 cases, 22 were for influenza-like illnesses, 2 were heat-related illnesses, 3 were food-borne, 5 for diarrhea, 4 for prolonged fever, 1 for acute fever and rash, 1 for fever and jaundice and 1 for an unusual health event.

“It’s been reported already that one … we are surveilling is heat-related illness. So you’ve seen that in a lot of people, not only delegates, but also the citizens of Guam, are also suffering because of the heat,” says SPC Team Lead Dr. Salanieta Saketa. “So things we are monitoring, particularly infectious disease, not only occurring in Guam–generally Guam is considered safe–but around, from countries that are coming in, there’s widespread at least in a few of the countries, there are outbreaks of dengue fever, of zika and also of conjunctivitis or pink eye.”

“So our goal is to detect them early and then respond promptly so we minimize the risk of spread both within the delegates but also within the local population. Since we have 27 jurisdictions coming in, we also don’t want them to take back something from here to their countries and jurisdictions,” he says.

Public Health has been distributing booklets with health tips for residents and visitors to follow. These booklets can be found at all FestPac sites.