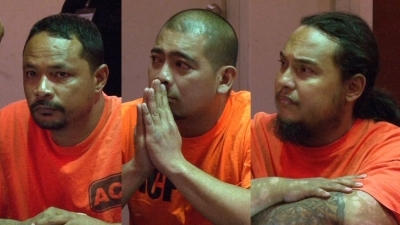 Jaycee White, Alfredo Castro, and Richard Ragadio have pleaded not guilty to all charges against them.

Guam – The three men who were indicted on charges of aggravated assault, kidnapping, and hindering apprehension in the incident involving bodyboarder Brian Cruz pleaded not guilty to all charges. White had an additional felony charge of manslaughter for allegedly causing the death of Cruz, which was ruled a homicide.

At an arraignment hearing this morning before Magistrate Judge Benjamin Sison, Castro and Ragadio waived their right to a speedy trial. White, however, did not, which means the Superior Court will have 60 days to take him to trial.

All three men are on house arrest and have a curfew, except for an hour before and after work. Ragadio, through his counsel Jay Arriola, has requested that the curfew be lifted because Ragadio is an on-call substitute teacher but has not been called in to work.

Their next hearing is scheduled for Nov. 17 at 9 a.m. before Judge Michael Bordallo.