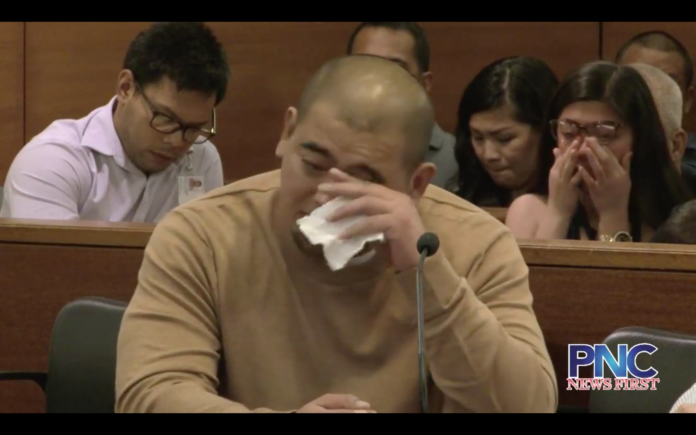 Emotions ran high at the sentencing of Jaycee White as the family of Brian Cruz faced the man whose “senseless act” resulted in the death of their loved one.

Guam – Jaycee White handed down a sentence to the the family of Brian Cruz of life without the possibility of ever seeing their loved one again. On October 22, 2016, White delivered a single blow to Cruz which ultimately resulted in his death. Convicted of aggravated assault, today it was White’s turn to be sentenced—but before his prison term was handed down, he had to face Cruz’s family.

Cruz’s mother, Katalina Cruz shared,”It is difficult for me as a mother to understand what was going on when everything was in view and not only that it was very evident that everything that you were doing was senseless it was a senseless act. I don’t intend to forgive you or Richard Rigadio. You don’t owe me any forgiveness give that to Brian.”

“I have written a statement and i was going to read off of it but i needed to make sure that I look straight into your eyes and the eyes of your family to understand exactly what our family is going through. Heinous, violent, senseless more like—individuals with no humanity, inhumane, nothing in the parameters of human actions,” exclaimed Denise.

Cruz’s family made it very clear the turmoil that has been caused since Brian’s death not only on his siblings but most importantly on his three children who at the time of his death were only 5, 7, and 8 years old. After the family addressed White, he was given the opportunity to share an apology the Cruz’s family.

In sentencing, Judge Michael Bordallo had to consider all the facts, the aggravated assault conviction and White’s clean record.

Judge Bordallo stated, “We are mindful of the impact it has has on children and one thing Mr. White has the luxury of is presumably in three years he will enjoy his children growing up and as statements have been made walk them down the aisle if that’s going to happen.”

Judge Bordallo sentenced White to 3 years with 6 months suspended and credit for time served. Leaving White with 2 years and six months in prison. He must self-surrender January 25th, and will be liable for restitution. Upon his release he will be placed on a three year probation and no contact with victims in the case.