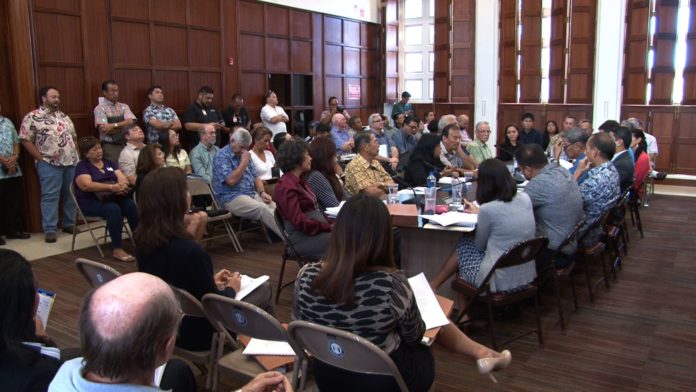 Guam – The wholesale and banking industry filled the legislature’s public hearing room today to oppose the proposed end of tax exemptions on their respective industries. Both these businesses exempt from paying the Business Privilege Tax, also known as the Gross Receipts Tax (GRT).

Governor Eddie Calvo has introduced a bi-partisan compromise bill that he worked on with Speaker B.J. Cruz and Senator Dennis Rodriguez Jr.  The measure would repeal these exemptions in order to bail out the Guam Memorial Hospital and fund critical renovations. The legislation, which is being used to end an impasse the governor and speaker had on how to solve GMH’s financial problems, was introduced after Public Auditor Doris Brooks published a study showing GovGuam was losing out on millions of dollars of revenue due to these tax exemptions.

“I know that most of the folks that are here in the audience they are here to defend their exemption. Very clear. And I want to be able to give them an opportunity to speak,” said Senator San Augustin.

Frank Shimizu, President of the wholesale company Ambros Inc. broke down the state of the wholesale industry to lawmakers in a presentation. Shimizu says the GRT exemption was given to the wholesale industry via a bill introduced by Senator Frank Santos in 1984. The idea was to eliminate what wholesalers refer to as a double taxation on the same goods. Shimizu says wholesalers would be taxed on their sales of wholesale goods to retail businesses who would in turn be taxed on the same good at the point of retail. This is what they say constitutes a double tax. However, it should be noted that it’s not the individual items themselves that are being taxed at any point of sale, but rather the business itself as a whole is taxed on Gross Receipts—that is, the gross or total amount of money a business receives before expenses.

Shimizu says in 1984 there were 6 wholesalers with 640 employees, while in 2017 there were 87 wholesalers employing 2,320 people. Shimizu argues this demonstrates the tax exemptions allowed the industry to grow and increased local jobs.  Instead of lifting exemptions, Shimizu made suggestions he said will bring in a lot of revenue that the government is currently losing. One is scanning capable registers to get an accurate count of the transactions. Another recommendation: ensure all imports are reported accurately.

Many other large wholesale companies and banks were in attendance, and according to the sign in sheet they are all opposed to the lifting of their tax exemptions.  Several senators said they need reliable data from Rev & Tax before they can even begin to make a decision on lifting tax exemptions.

“The economic data that could be farmed from DRT is a goldmine, if we could ever capture it. You know just knowing where our taxpayers are?  What is our average income?  What is the high end the low end?  All of that. DRT has a wealth of data but the problem is capturing it,” said Public Auditor Doris Flores Brooks.

“We need to bring in the Bureau of Stats and Plans, the Office of Technology, GEDA, and all of these other different agencies that should contribute to the conversation of how we’re going to create a process by which we are going to be evaluating these policies,” said Senator Mike San Nicolas.

Senator Fernando Esteves told Rev & Tax that in the very least they need to come up with procedures to ensure data is being captured and inputted properly.  Speaker Cruz agreed saying, “Until you have the Standard Operating Procedure on how these things are supposed to be done…I don’t know why and you’ve admitted it several times today.  Your divisions within your department don’t or can’t talk to each other.”

An actual public hearing on the bill to lift these tax exemptions has yet to be scheduled, but Senator San Agustin said that the comments received today (Tues.) would be submitted as official testimony.