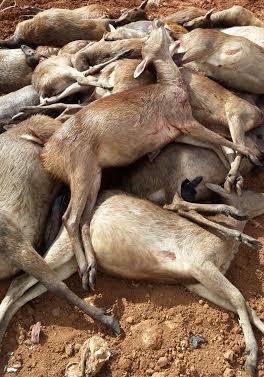 PNC confirmed that this pile of deer was dumped at the Layon Landfill by the USDA onThursday.

Guam – A pile of dead deer was dumped at the Layon Landfill by a U.S. government agency.

PNC received a picture of this pile of deer that has been circulating on social media. GBB operations manager Chase Anderson confirmed that this pile of deer was dropped to the Layon landfill for disposal by the U.S. Department of Agriculture Thursday.

It’s not clear yet why the deer was disposed of there. Andersen Public Affairs Officer Capt. Joel Banjo-Johnson has confirmed that USDA Wildlife Services conducted “ungulate (hoofed mammal) control measures” on Andersen Air Force Base on May 11th and 12th. The 12th is the same day that GBB confirmed that deer were dumped at the Layon Landfill.

Banjo-Johnson could not speak on behalf of the USDA about their procedures or what they may have done with the carcasses from the 11th and 12th.

PNC reached out to the USDA at 3 pm Friday afternoon and were told that the only person who could answer our questions was off for the day.