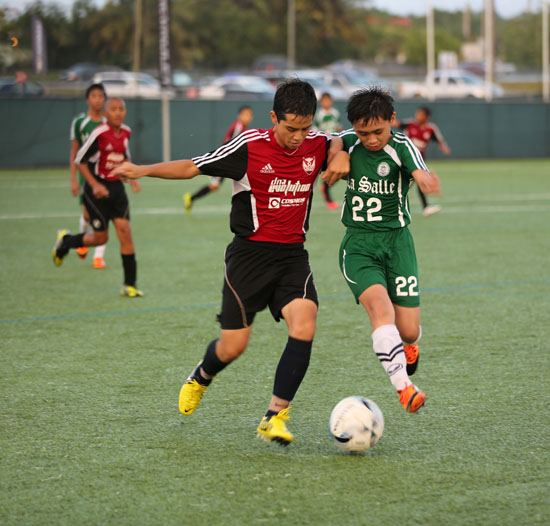 Guam -The Wings FC claimed both the U10 and U14 division titles in the 2012 Governor’s Youth Athletics Invitational soccer tournament over the weekend at the Guam Football Association National Training Center.

In the U14 division, the Wings FC only needed at least a draw with the ASC Islanders to earn the tournament title Sunday.

Early in the match, the Wings FC’s Jion Aoki followed up on a blocked Xavier Kirksey shot for the one-goal advantage. Later, teammate Jordan Jasmin added another goal to the Wings’ tally with a perfectly curved long-range free kick that sailed just over the Islanders’ keeper and tucked into the upper corner of the goal.

[The Wings FC’s Jonah Sablan battles for possession of the ball against a De La Salle Santiago Zobel defender during an opening day U14 game of the 2012 Governor’s Youth Athletics Invitational soccer tournament Saturday at the Guam Football Association National Training Center.]

The Islanders used the second half to chip away at their opponent’s two-goal lead. First, Kyle Perez found some space down the left side and carried the ball up to Leon Bamba. Bamba then sent the ball into the penalty box, finding teammates Paris “Mames” Blas and Jeffrey Ho. Ho got the last touch on the ball as he advanced forward into the goal. Later, a Perez steal led to a pass to teammate Tevin Pangelinan, who assisted Ho’s second goal of the game. Both teams beefed up their defenses led by goalkeepers Sean Evans and Logan Mance of the Wings and Islanders, respectively, as time ran out, to prevent a winning goal.

Although both teams were undefeated in the four-team tournament, the Wings scored more goals overall than the Islanders for first place. The Islanders settled for a silver finish.

Despite drawing with Quality 2-2 in the tournament’s last game, La Salle won the battle for third place based on goals scored. Ibana and Trent San Diego scored for La Salle and Ian Tumamak and Dwight Sablan scored for Quality.

In the U10 division, the Wolverines had a chance to take the tournament title – by posting a win and recording at least seven goals in its last game against visiting Claret School of Quezon City. Claret played spoiler, holding the Wolverines to a 2-2 draw. The Wolverines scored its first goal of the game when Jonathan Sevilla took the ball from a replayed short Claret goal kick and shot it past keeper Gio Philip Estrada. Claret answered back with a goal from Florenz Carlos Tacardon before the halftime whistle. Claret momentarily gained the upper hand when Raniel Emil Castro converted his penalty kick, awarded to his team after Tacardon was taken down in the penalty box. The Wolverines capitalized on a set play later in the game when captain Shaun Paul Martinez scored on a left-footed free kick that went over the Claret wall and into the goal.

The Wings recorded the largest win margin in the U10 tournament when the team defeated Claret 6-1 Sunday morning. Heckler scored twice, as did teammate Matthew Iseke. Kyle Halehale and Mark Iseke each scored once. Castro scored Claret’s lone goal.

The Wings’ only loss came against Community First Sunday. Patrick Haimin scored on a header from a corner kick from Kido for Community First’s first goal and Kido scored the eventual game-winning goal. Heckler scored the Wings’ lone goal.