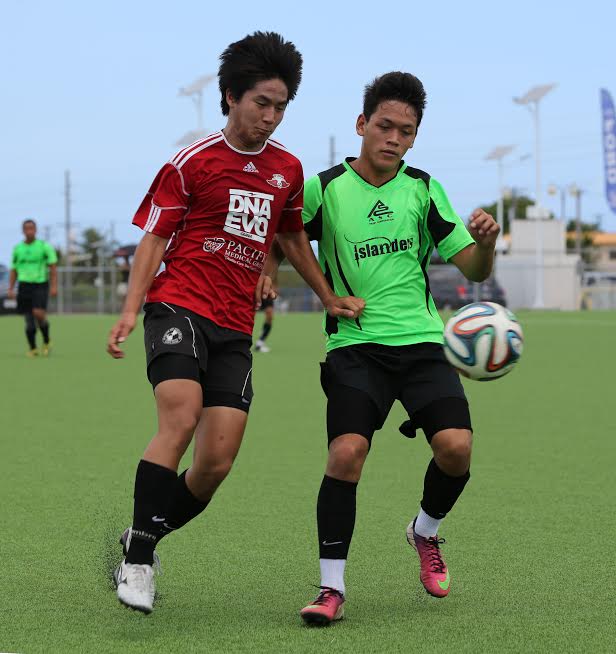 Harmon, Guam – The Wings Red managed to wrest the U17 division title of the Triple J Auto Group Robbie Webber Youth Soccer League from the ASC Trust Islanders Betde after meeting the minimum requirement – a draw – in the final week of upper division matches at the Guam Football Association National Training Center.

A Wings Red draw with the Southern Heat in Week 10 gave the Islanders (9-1-1) a glimmer of hope to repeat for a division title that the team held through 2013, but the urgency of their must-win situation against the Wings Red (9-0-2) came late in Week 11.

After the Wings Red pulled ahead with a 4-1 lead by halftime, the Islanders began their comeback with just 10 minutes left into the deciding half. A pair of goals from Sora Recella put the Islanders within one and in the 80th minute, Nick Cabuhat connected on a rebound from a shot by teammate Ryan Quitugua to force the 4-4 draw.

[Photo: The Wings Red’s Isiah Lagutang and the ASC Trust Islanders’ Ryan Quitugua battle for possession of the ball in a Week 11 U17 division match of the Triple J Auto Group Robbie Webber Youth Soccer League at the Guam Football Association National Training Center. The teams battled to a 4-4 draw. Photo courtesy of Jill Espiritu.]

Isiah Lagutang led the Wings with two goals and teammates Marlon Evans and Kaito Inoue contributed one each. Jared Collado scored the Islanders’ lone goal in the first half.

“It feels good that the team was able to get the title back this season,” Lagutang said after the match. “What we could have done better was to keep up the pressure on the Islanders through the whole match and not slack off, even when we’re leading.

“Overall, we did well and the Islanders did well. It was a good game, and it was a good comeback for them to force the draw,” added Lagutang, a 16-year-old student at Harvest Christian Academy.

Chris Cawili, Keita Yoshida, Alexander Errett and Raymond Macias all scored in the Strykers 4-1 win over the Wings Black. Inochi Recella scored for the Wings.

In the U14 division, the Strykers Red completed its dominance of the division, blanking the Wolverines to finish the entire season without allowing any goals. Clayton Mitchell, Xavier Naputi, Anthony Moon, Rhys Paynter, Vince Cruz, Giosue DaPonte, Ethan Elwell, and Elijah Nguyen all scored in the win. The Strykers next will be traveling to the Philippines for friendly matches.