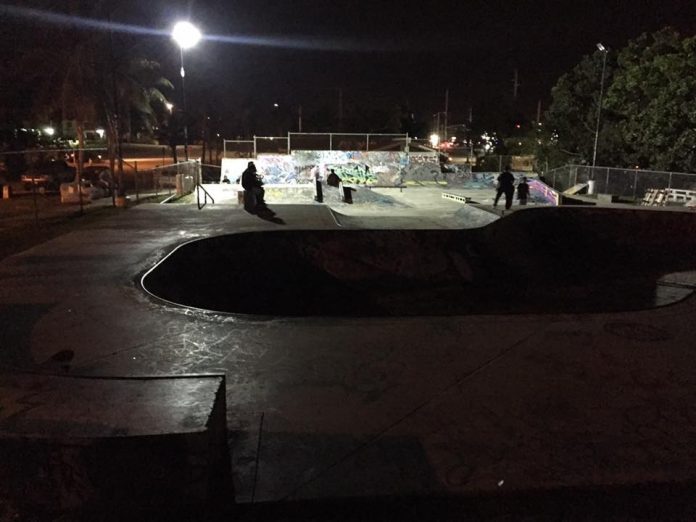 The main concern for skaters is safety.

Guam – Exploding lights, shattered glass and trash spread along the park are just a few issues facing local skaters at the Dededo skate park. The patrons of the park tell PNC that the main skate park in Guam is falling apart.

This is a follow-up to a story we aired a couple of months ago about the state of the Dededo skate park. Many skaters have since voiced their concern that the state of the park has further declined. Monte Reavill, a skater and regular user of the park, took these photos of what the park currently looks like at night.

According to Reavill, just yesterday, one of the only two working lights in the park exploded, leaving one lone light. Because it is an open-air park, skaters say the ideal time to skate is after 4.pm. But with only one light working, this does not leave a long time to use the park.

“There’s only one light working out of 12. You cant skate in those conditions, its all concrete, open air parks and in Guam’s sun, given the drought conditions that Micronesia is facing, its kind of hard to skate anytime before 4p.m.” says Jayton Okada.

Jayton Okada, who typically organizes events at the park, says the park is one big safety hazard and is becoming unusable. Still all these issues can be fixed and the parks daily inhabitants have pledged to do so. With help from non-governmental organizations, Okada says they can make the necessary changes, but they need guidance and permission from either parks and recreation or the Dededo mayors office.

“When it comes to the skate park, our skaters do most of the upkeep, that’s really been the object of contention, we are willing to take care of the skate park, if the agencies aren’t we just need help getting the resource. The big problem is the mayors offices and the department of parks and rec and the big agencies, its been a hot potato toss, no one wants to decide, who is responsible for the skate park,” said Okada.

The main concern for Okada, Reavill and other skaters is safety. Without working lights or proper upgrades, the park will become one of many dilapidated and near abandoned parks in Guam.

“If we can put money into seventeen restrooms that look really nice, have nice marble, have nice faucets, why cant we take care of twelve lights, you know,” said Okada.

Dededo Mayor Melissa Savares says that the maintenance and upkeep of the park falls on parks and recreation. But stresses that the park is a shared responsibility.

Calls to Parks and Rec Director Bob Lizama were not returned as of news time.