In the Keith Castro murder trial, Matt Sablan recounted the events that transpired when Castro was shot outside Sablan’s Yigo home, stating that Castro begged his assailants to stop.

Joshua Palacios is on trial for the murder of Castro but in court today, defense attorney Thomas Fisher made it a point to shift focus away from his client and on to Thomas Taitano, the man who pleaded guilty to assaulting Castro.

On the stand, Sablan told jurors that Castro was his friend, he also told the court that he tried to break up the fight before the fatal shot was fired.

Sablan testified that Thomas Taitano chased Castro around the home, striking Castro at least a hundred times with a baton each strike with seemingly great force.

Sablan says he tried to stop the fighting by pushing Taitano off Castro. But Taitano chased after Castro continuing his assault.

When Castro ran into the garage, Sablan said Taitano followed, kicking and punching him. Sablan said that’s when Palacios joined in egging on Taitano before beginning to strike Castro.

Sablan says as Palacios hit Castro the gun went off. He told the jury that he saw the gun in Palacios hand but could not describe the weapon. During the assault, Sablan says Castro begged them to stop but that plea fell on deaf ears. 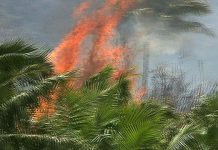