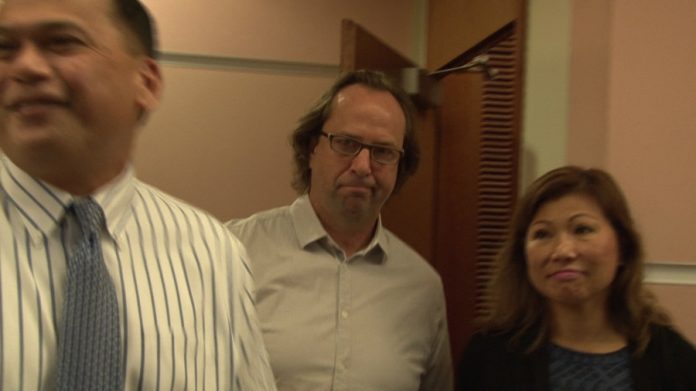 With tears in her eyes, C.P. sat in the witness stand recounting the events of the evening of November 1, 2014.  A witness in this case, C.P. shared that she and her friends were at a Halloween party at the professor’s residence when Ehlert allegedly assaulted three of her fellow classmates.

C.P. recalled meeting up with her friend at Payless in Micronesian Mall so that her friend H. could “sober up” after the party stating, “we were all freaking out we didn’t know what to do. I decided to talk to victim identified as H. I decided to ask if she was okay. I was in shock at what I saw. I asked her if she wanted to report it. There was just so many people that got hurt. At least F. and H.”

C.P. was referring to the alleged sexual assault in which Ehlert is accused of digitally penetrating two of his students while they were at his residence. C.P., along with about 10 to 15 other students, attended the Halloween Party at Ehlert’s home.

In court, C.P. shared that she first reported the sexual assault to the Guam Police Department a day or two after the incident, stating she also reported it to the UOG where she spoke with Women Against Violence.

Ehlert was a psychology professor and advisor who helped students plan out courses. C.P. stated that before the incident occurred she went to Ehlert for his assistance in planning her college course plan. And according to C.P., all but one of the students that attended the Halloween party where in the psychology program.

While the prosecution painted the picture of the events which followed the alleged assault, Ehlert’s Legal counsel Jay Arriola switched focus to the events which occurred at Ehlert’s residence. Entered into evidence were two videos depicting events from that evening. C.P., H. and F., along with several other students who could be seen in the videos.

In the first video, the students and Ehlert could be seen playing a game called Cards Against Humanity, laughing at Elhert who, in response to the game, makes a comment about Ghandi’s sexual activity. According to C.P., that comment made her “uneasy.”

In the second video, the students are sitting in Elhert’s home playing games after apparently swimming at the beach. At one point in the video, Ehlert is seen being guided into the home by a male student. Ehlert appeared to have just finished swimming as he was shirtless and only wearing white boxer briefs identified as the brand Under Armour.

C.P. is the first of up to five witnesses that will testify in this case. The trail for Ehlert will continue on Monday.