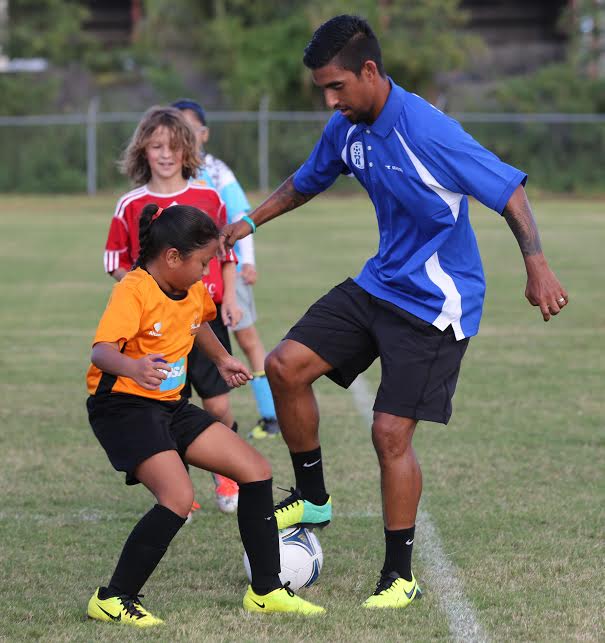 “It was pretty fun, but very challenging to play against A.J.,” Cabrera said after plying her trade with other youth soccer players participating in an afternoon soccer clinic facilitated by DeLaGarza and other members of the Matao.

Aside from playing in the fun afternoon pick up game, Cabrera had her cleats, shin guards and a card autographed by DeLaGarza. The Orange Crushers FC youth soccer player was among hundreds of other young athletes who mobbed DeLaGarza for photos, autographs and questions about soccer during his special visit to GFA for the Docomo Pacific Robbie Webber Youth Soccer League. DeLaGarza, who has won two back-to-back MLS Cup championships with the L.A. Galaxy, also participated in a press conference before the afternoon youth soccer activity.

“It was fun being out here with the kids,” DeLaGarza said. “When I was younger, I looked up to professional soccer players and when I got to meet them, it was a special moment, something I’ve never forgotten.”

At the same time the Matao facilitated the afternoon soccer activity, the Wolverines won a penalty kick shootout 5-4 over the Wings FC to garner the U12A division championship. The Wolverines, a team that upset the previously undefeated ASC Trust Islanders Betde in the teams’ Week 8 match, battled to a 1-1 draw with the Wings in regular time. Controversy ensued late in the penalty kick shootout when the Wings celebrated early on a Wolverines shot that hit the crossbar and bounced out of the goal that would have been a 3-2 win for the Wings. The referee deemed that the ball was past the goal line before bouncing out of the goal, thus continuing the shootout with both teams at 3-3. The teams sent two more kickers each, and a final goal from the Wolverines’ John Topasna sealed the championship win for his team. Niclas Vavra and Michael Lee each scored regular time goals for the Wings and the Wolverines, respectively. 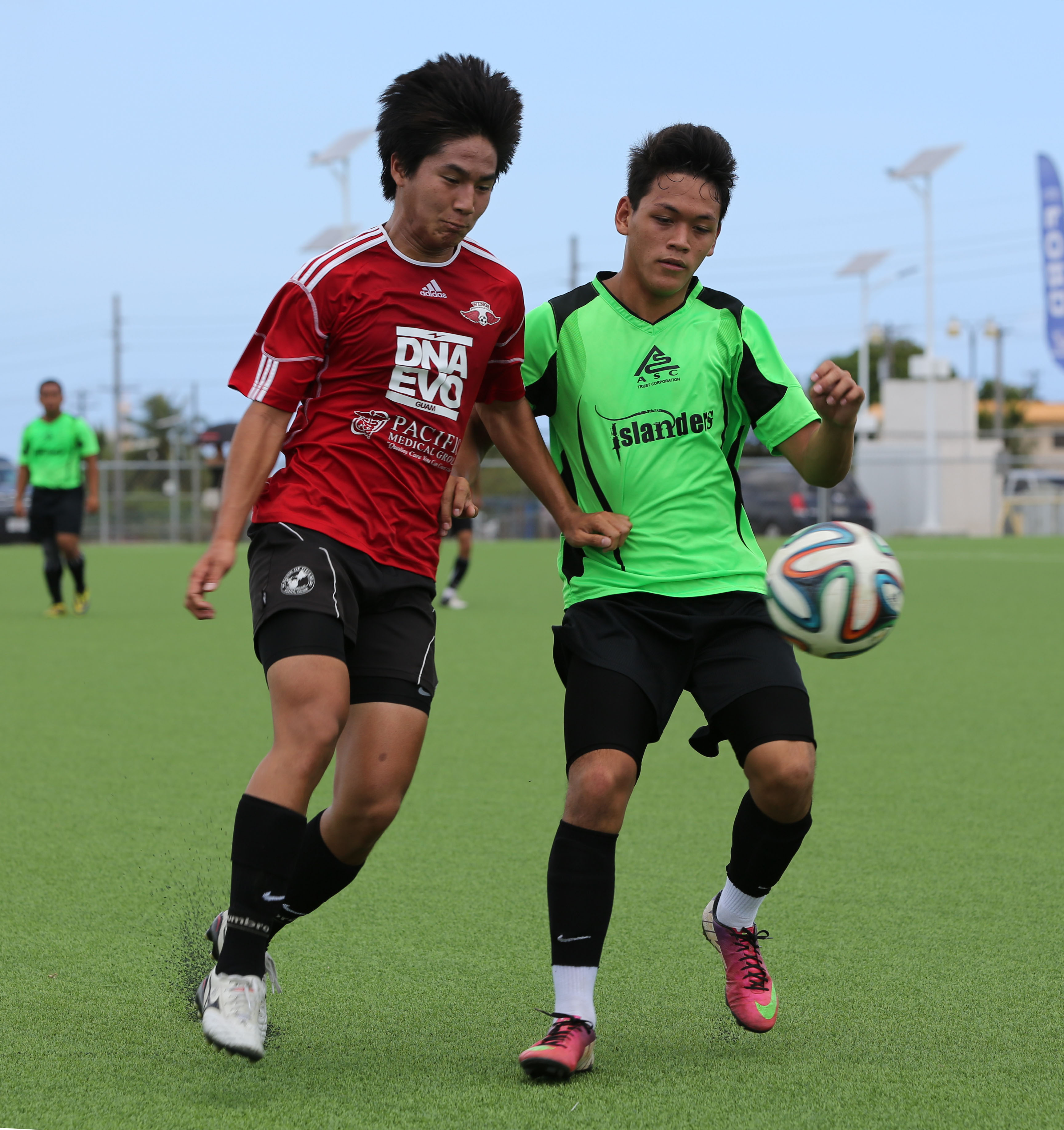 [Photo: The Wolverines’ Shyann Roberto and the Wings FC’s Mark Iseke battle for possession of the ball in the U12A championship match of the Docomo Pacific Robbie Webber Youth Soccer League at the Guam Football Association National Training Center. The Wolverines won 5-4 in a penalty kick shootout, following a 1-1 draw in regular time. Photo by Jill Espiritu.]

In the battle for third place, the Islanders Betde defeated the Tigers 4-3, also in a penalty kick shootout. In another U12A match, Community First Dededo Soccer Club defeated Quality Distributors 2-1.

In the U14 division, the Wings’ 6-0 win over Dededo secured its spot in the division final against the Strykers, 5-1 winners over Islanders Betde. Xavier Naputi, Jacob Herring, Anthony Moon, Aidan Dickson and Clayton Mitchell scored one each for the Strykers. Devan Mendiola scored the Islanders Betde’s lone goal.

The Sidekicks, 3-0 winners over the Islanders Asut, will battle for third place against Quality Distributors FC. Quality advanced with a win over the Wolverines via forfeit.

It will be déjà vu in the U17A division, with the Islanders Betde facing the Wings Red for the division championship. The Islanders Betde survived a scare from the Southern Cobras. The Cobras battled to a 2-2 draw until the Islanders Betde’s Sora Recella hit a high, distance shot from the right side to the opposite post in the final seconds of play to lift his team to victory. Recella also scored his team’s other two goals. Napu Topasna and Donovan Reyes scored for the Cobras.

The Wings Red defeated its Black counterparts 4-2 for the other ticket to the finals. In other U17A division matches, the Sidekicks won 3-1 over the Wolverines in a penalty kick shootout, after playing to a 4-4 draw in regular time. The Southern Heat picked up a win over the Strykers via forfeit.

The U6 to U12 division teams will participate in the fall season-ending Grassroots Jamboree, while the U14 and U17 division teams will play in their final league matches Saturday. A schedule can be found on GFA’s Web site, www.guamfa.com/all-leagues-youth-fall-results.