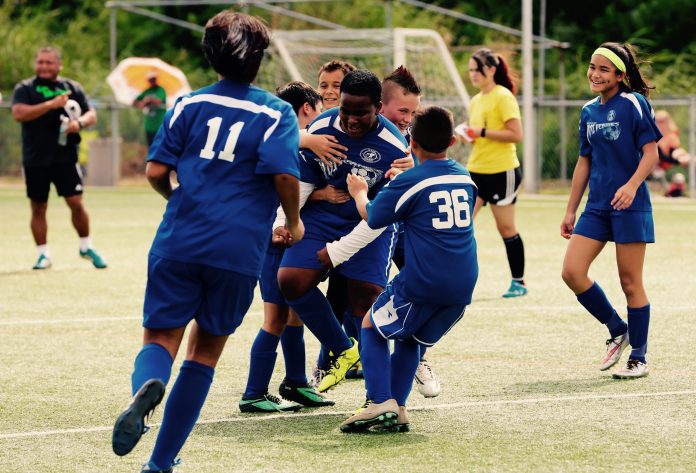 “To win the championship this season, I think we’ll need to stay humble and do our best to play as a team against the Wings,”

Spring-season finalists Wolverines managed to stop the ASC Trust Islanders Betde offense, which averaged about 10 goals per match in the regular season, and prevail 1-0 for their ticket to the finals. Kaddin Hutcherson scored the lone goal in the contest in the second half.

“The match against the Islanders was a really close match and it made me feel really happy for the team when we were finally able to score a goal,” said Isaiah Topasna, 11-year-old Wolverines goalkeeper. “Defensively, I think we did well too; our defenders dropped back quickly when the Islanders had possession and were able to stop them from scoring.

“To win the championship this season, I think we’ll need to stay humble and do our best to play as a team against the Wings,” added Topasna, who has played the goalkeeper position since he started soccer at the U6 age division.

In the other U12A semifinal match, Spring-season champions Wings Red edged their Black counterparts 2-1 in a penalty kick shootout after drawing 2-2 in regular time. Justin Joseph and Andrew Kilgore scored for Wings Red in regulation time and Taiyo Kanekatsu and Andrew Choi scored in the shootout. Lucas Cooper-Nurse and Kyle Takano scored for Wings Black in regulation time and goalkeeper Caden Chadwick converted the team’s lone penalty kick in the shootout.

In other U12A non-playoff matches, the Orange Crushers defeated Tumon 5-3 with two goals each from Bobby Haddock and Hayden Morgan and one from Brian Xia. The Strykers defeated Quality Distributors, Community First/Days Inn Dededo Soccer Club blanked the Tigers 5-0, and Tsunami Flood defeated the Sidekick SC 6-4.

In the U14 division, Dededo defeated Islanders Isa 7-0 with three goals from John Halili and two goals each from Diether Messner and Joseph Green. The Tigers defeated the Sidekick SC 7-0 with four goals from Yu Chan Lee and one each from Luke Kim, Seung Min Kim, and Darrell Ramos. The Wolverines defeated Southern Cobras 3-0 with two goals from Ben Sweeney assisted by John Topasna and one from Nolan Sablan. Wings Red edged Islanders Betde 1-0 with a goal by Connor Chadwick off a shot from Eddie Cho.

In the U17A division, the Southern Cobras edged the Strykers 5-4 with a hat trick by Seth Surber and one goal each from Phil Jardaleza and Austin Rioja. Xavier Naputi scored four for the Strykers. Quality Distributors defeated the Sidekick SC with goals from Camden Camacho, Jason Kim, Eddie Huang, An Truong, Ryan Ledger, Matthew Calip, and Ryu Topasna. Tomoya Tisdale scored for Sidekick SC. Wings Red fought back from a 3-0 deficit to draw with the Islanders Betde 3-3. Derek Okuhama scored twice for Wings Red and teammate Jordan Jasmin also scored. Tevin Pangelinan scored twice for the Islanders and teammate Leon Bamba also scored. Wings Black defeated the Wolverines via forfeit.

Recipients of green cards during the season in the Fair Play with Triple J promotion also will be presented prizes during Jamboree.