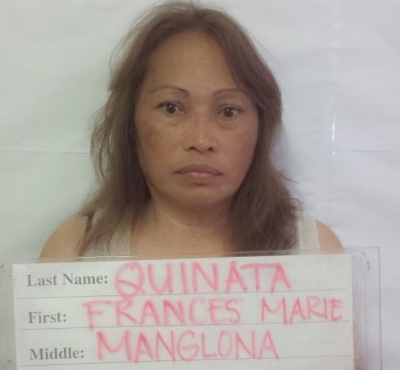 Quinata is under investigation for allegedly defrauding the Guam Softball Team.

Guam – Francis Quinata, the woman accused of stealing money from various clients by duping them out of airline tickets, most notably, the Guam softball team, was in court today for a different scheme.

According to a magistrates report, back on June 3rd, Quinata sold two departure tickets to two clients from Guam to Texas for $1,154. According to the report, Quinata told the clients that their return tickets would be waiting for them at the Texas airport. However, when the clients attempted to return to Guam, the airline informed them that their tickets were not paid for. One of the clients attempted to clear the situation with Quinata only to eventually lose contact with her. The clients were forced to pay for return tickets. The report states that police reviewed travel documents and discovered that Quinata had purchased the tickets and that they had only cost $922. To date, Quinata has yet to reimburse the clients. She is also under investigation for stealing approximately $38,000 from the Guam Softball team in a similar situation. Her bail was set at $5,000 and she was released on her own recognizance, which is a written statement promising to appear in court at the next scheduled date. If Quinata fails to show up for her next court date, she will have to pay the full $5,000. For the full magistrates report, click below.