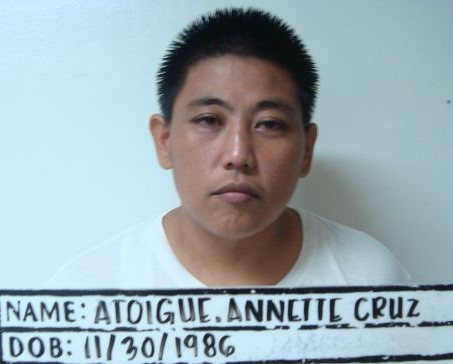 A woman accused of strangling her girlfriend has been arrested for family violence.

On Sunday, at around 3:39 pm, police responded to a disturbance at a residence in Yona.

When police arrived, a woman alleged that she was assaulted by her girlfriend, Annette Cruz Atoigue, who she had been dating for about three years.

According to the magistrate’s complaint, police observed that the woman had bruises around her eyes.

Police conducted an injury check of the woman and noted swelling on the left eye and bruising on the right eye as well as scratches on her neck.

The woman told police that she had been hanging out with her brothers when Atoigue asked her why a male was texting her.

The report then states that Atoigue allegedly punched the woman’s left eye two times, and strangled her with both hands.

The woman said the strangling lasted at least a minute and that she almost lost consciousness.

The woman also says that she was punched twice on the left side of her body.

When the police questioned the woman about the bruise on her right eye, she said that the previous Friday afternoon, Atoigue had accused her of talking to men which was followed by Atoigue punching her in the right eye.

The woman stated that she attempted to call police regarding that incident. However, Atoigue managed to stop her from doing so.

The magistrate’s report states that based on the evidence Annette Cruz Atoigue is charged with the following:

1 count of family violence-strangulation as a 3rd-degree felony;

1 count of interfering with the reporting of family violence as a 3rd-degree felony; and

2 counts of family violence as a misdemeanor