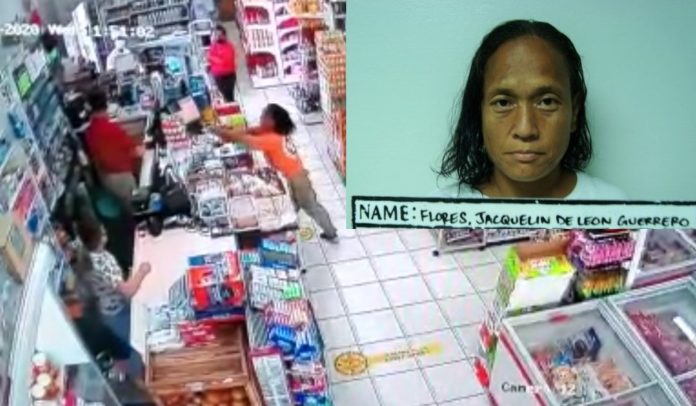 A video of a robbery at the Macheche Mart in Dededo shows a woman pulling a gun out of her back pocket and pointing it at the cashier.

When the woman attempts to leave, another employee grabs the weapon and disarms her.

The weapon turned out to be a BB gun.

The woman was arrested. Police have identified her as 45-year-old Jacqueline De Leon Guerrero Flores.

The robbery occurred Wednesday at the Macheche Mart in Dededo.

The surveillance footage circulating on social media shows the woman placing a six-pack of beer on the counter and then pulling the weapon out of her back pocket.

The video indicates that it was just before 12 noon on April 29. At the time, the store was busy with customers.

A store employee can be heard on the video speaking to the police. The cashier is heard to say: “I gave her what she wants.”

“I was nervous,” said another employee.

A man, who appears to be the manager, points to the struggle between the woman and the man he identified as his “spotter.”  He can be heard saying “at that time, one bullet shot.”

GPD spokesman Sgt Paul Tapao said that Flores has been arrested on a robbery allegation.

She has been booked and confined at the Department of Corrections.