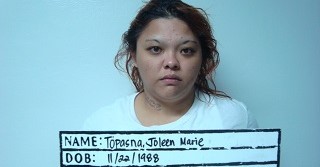 A routine traffic stop this week has led to an arrest in an aggravated assault case filed earlier this year.

Guam Police say on Tuesday, officers conducting a traffic stop on Route 1 Marine Corps Drive in Piti, learned that the operator of the vehicle, 31-year-old Joleen Marie Topasna, was a suspect in the case from April this year.

When police realized Topasna was the suspect, they took her into the Southern Precinct Command for further investigation.

Police say, according to a witness, Topasna struck the victim with a car during an altercation and dragged the victim several feet which caused injuries to the victim’s knees and hip area.

This happened on April 5 in Agana Heights.

Topsana was subsequently booked and confined at the Department of Corrections. This case has been forwarded to the Office of the Attorney General for prosecution.