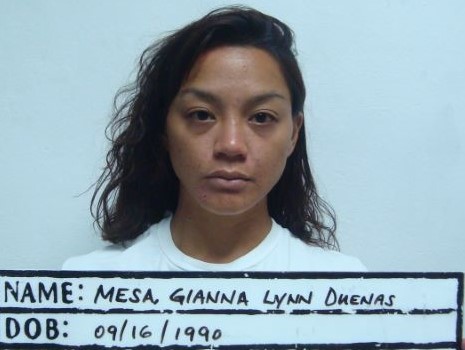 A mother’s concern over her daughter’s unusual behavior prompted her to call police for help.

When police arrived at the Inarajan residence, they noticed Gianna L. D. Mesa talking to herself and approached her to figure out the situation.

Mesa explained to police that she had an argument with her mother but that’s all police were able to gather.

Police stated that Mesa kept veering off subject and speaking rapidly while pacing back and forth.

As Mesa continued to speak incoherently, she also moved her arms and appeared ready to strike or slap police.

Police say Mesa then abruptly began to walk away and disregarded police instructions.

“Defendant then raised her right arm with a closed fist and aggressively approached police officer T. Tomaisiak. Police grabbed her right arm and told her to stop her behavior, to which defendant uttered expletives and insults while trying to break free from police’s grasp,” state court documents.

During the altercation, Mesa grabbed the chains of a swing set pulling it down towards police. No injuries were reported as the swing set missed the officer.

Police were able to handcuff Mesa despite her attempts break free.

Mesa was charged with assault on a peace officer and resisting arrest.