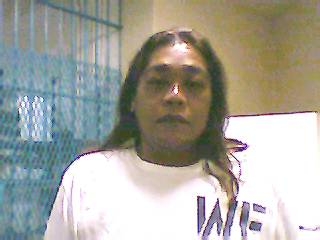 A 43-year-old woman is arrested for barricading herself in a bedroom then biting a police officer.

Guam – A 43-year-old woman is behind bars for biting a police officer in the arm.

Lunetta Tainatongo was charged in Superior Court today with assault on a Peace Officer and Family Violence. The magistrate’s complaint says that Tainatongo had gotten into an argument with her mother Monday afternoon, so her mother called police to have her removed from the home.

Tainatongo then barricaded herself into a locked bedroom and refused to get out. A family member removed the door from its hinges and when a police officer stepped in, Tainatongo reportedly pushed a dresser drawer onto a police officer, striking him in the face and chest.

The police officer attempted to subdue the suspect but was bit on his bicep. She was eventually restrained using pepper spray. GPD Spokesman Officer Paul Tapao says the police officer was treated at GMH for his injuries.