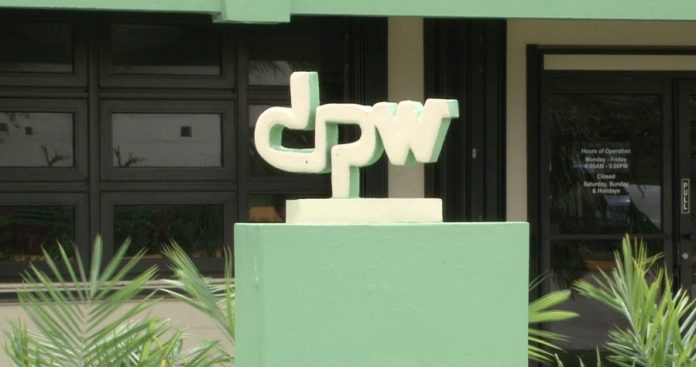 Krystal Pangelinan says a protruding manhole along Route 4 was not properly marked as hazardous when contractors were conducting renovations to the roadway.

Guam – A husband and wife is suing Parsons Brinkerhoff, Hawaiian Rock Products, DPW and the Guam Memorial Hospital after the couple got into a car accident because of a protruding manhole and a poorly paved roadway.

The problem, the couple says, is that the construction companies failed to place warning signs at the roadway construction site.

The car accident happened on July 24, 2012 at around 6:20 am.  Quinton Quintanilla was driving and Krystal Pangelinan was a passenger in the Toyota Hilux pickup when the car struck a protruding manhole along Route 4 in Hagatna, causing the truck to veer off the road and slam into a concrete utility pole.

In court papers, Pangelinan and her husband, Mark Pangelinan, say Hawaiian Rock Products and Parsons, the contractors hired by the Department of Public Works for reconstruction of the Route 4 highway, failed to place warning signs in the construction area warning drivers of the hazardous road conditions.

On top of a protruding manhole, Pangelinan says the roadway itself was also dangerous as the contractors had not placed any non-skid surfacing along the accident site on Route 4—an area, the plaintiffs assert, where many other car accidents have happened in the past.

“The wanton, careless and negligent acts of DPW, Hawaiian Rock and Parsons were a direct and proximate cause of the injuries Krystal suffered in the accident,” the complaint reads.

In response, the contractors blame Quintanilla, who was driving when the accident happened, saying Quintanilla “failed to operate that vehicle in a careful and prudent manner.”

But they’re not the only ones Pangelinan is suing. She’s also filed a complaint against the Guam Memorial Hospital for failing to diagnose her properly immediately after the accident.

Pangelinan says she was discharged from GMH the same day even though she was still in severe pain. So she sought a second opinion at Naval hospital where she was told that she actually had multiple spinal fractures.

Pangelinan was eventually medevaced to Hawaii for treatment and rehab for several months. To make matters worse, Pangelinan was told that it would take her several years to make a full recovery.

Pangelinan did not specify an amount she is suing for in her lawsuit. You can read her complaint by clicking on the file below.