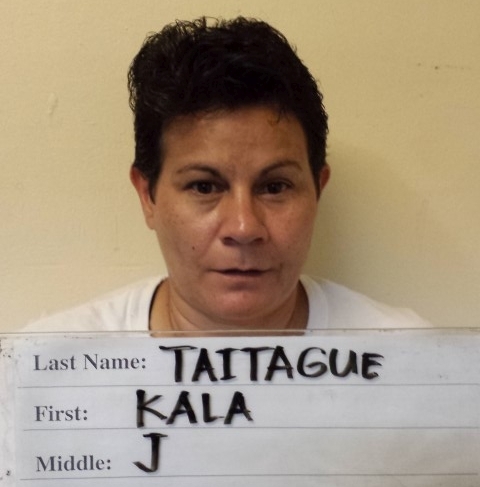 Kala Joe Taitague is accused of trying to destroy evidence by flushing contraband down the toilet.

Guam – A woman is now facing charges of promotion of prison contraband after she was caught trying to smuggle illegal drugs into prison and, according to Department of Corrections Spokesman Lt. Jeff Limo, she did this as she was turning herself in to serve out a sentence.

Kala Joe Taitague, 50, according to a magistrate complaint, was being strip searched inside the women’s restroom. She removed her shirt and then “removed an item from her person” and immediately rushed to one of the stalls to flush the item down the toilet.

However, police say the toilet jammed so the items remained sitting in the bowl. When officers retrieved the items, they found a pouch attached to a condom that was wrapped in cellophane. In it, they confiscated tobacco, an unknown vegetable substance, nine orange-colored pills and 18 blue pills.

At this point the chemical composition of the pills are still being tested.

Taitague had been previously arrested for attempting to smuggle two grams of crystal methamphetamine while going through airport customs.