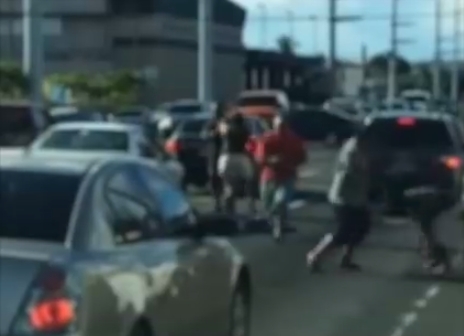 Police are asking the public’s help in identifying the two suspects in a viral video of a street brawl at a Harmon intersection.

Guam – A huge brawl in the middle of a busy intersection sent a man to the hospital and left a woman traumatized.

The graphic and shocking video, taken by a driver who was stuck in traffic on Route 16 in Harmon, showed a street fight involving several people, including what appeared to be a small child.
PNC got in touch with a woman claiming to be the driver of the vehicle and she explained to us what happened before the video started rolling.
She said, “When I saw all those, I thought that’s not the full . I guess from watching the video, of course what are people going to think when they didn’t see the whole thing. We came from the Hagatna area, and that’s when I noticed that. When I looked at my rear view mirror, I saw a blue Corolla tailgating so I stepped on my brakes and I was wondering what is this guy doing, why is he so close to my car, I don’t even know these two guys.
I just drove normal and then when I switched lanes, the car tried to go to the side of us and I switched again. I didn’t know what to do they were telling me to slow down.”
That’s when her boyfriend decided to dial ‘911’ because she said she was worried about the safety of her children, who were also in the car. She said the call kept getting transferred, which upset her. She said at the stop light, the two men in the blue sedan behind her hopped out of the car and kicked the back bumper of their car.
“I kept honking the horn for one of the cars to get out of the way but I was stuck they already came to my car, they ran up to my car and that’s the part where whoever was recording that didn’t catch those. My ten year old said they’re coming to the car! He got scared and he was crying and I told them hold your brother in the car and stay there. Don’t come out. That’s when the whole commotion went on,” she said.
In fear, her boyfriend and her brother-in-law also stepped out of their car and tried to fend off the other men.
She said, “They were protecting us because we don’t know what would happen if we stayed in the car, what they would come in and stab us, slice our throats too late so they had to get out and defend themselves they don’t want them coming near the car so that’s when I got out and do something to try and stop it but I couldn’t so I ended up getting hit, smashed, all of that”
In the video, her boyfriend in the red shirt is seen wielding a baseball bat at one of the men while her brother-in-law is grappling with the other. Just what appeared to be mere seconds after, her four-year-old boy jumped out of the car window and headed for his mom. Fortunately, the mother says the boy was not injured.
She said one of the other men seemed to have stabbed her brother-in-law on his forehead and that’s when the men started running back to their car. After the fight, she told us that her brother-in-law was bleeding and had to go to the hospital to get treated.
She said, “I don’t know if he had something in his hand, he has a cut in the middle of his nose, in between his eyes and a cut by his eye, and then the big cut on his left forehead…how is he going to get that cut, it’s got to be a knife to give that deep cut because when I saw it I was shaking, holding his head.”
Guam Police Spokesperson Officer AJ Balajadia says officers were first alerted to a possible riot but when they got there, it appeared the riot had already ended. They were then dispatched to a residence in Dededo where police found a man who appeared “uncooperative and belligerent” as medics were trying to assist the man. Police later determined that the man had been involved in the Harmon brawl earlier in the day. After interviewing several people, according to Balajadia, one of the suspects in the blue car fled on foot while the other occupant got back into the vehicle and fled the scene.
She said, “For my sake, my kids sake, now I don’t feel safe no more I’m scared.”
Police are asking anyone with information about the suspects to contact the Guam Crime Stoppers at 477-4357.