A woman in the Ysengsong intersection 2-auto crash this morning has succumbed to her injuries and was pronounced dead.

On Friday, September 3, 2021, at around 10:20 a.m., traffic investigators assigned to GPD’S Highway Patrol Division were activated to assume a fatal 2-auto crash that occurred on Route 1 Marine Corps Drive, by the intersection of Route 28 Y-Sengsong Road in Dededo.

Preliminary reports suggest that a gray Nissan Kicks was traveling north on the middle lane when a gray Hyundai Tucson, traveling south, collided with the Nissan Kicks on the northbound lane.

The 53-year-old female operator of the Hyundai Tucson was transported to Guam Regional Medical City for treatment and care. She was later pronounced deceased by attending physicians.

The two occupants within the Nissan Kicks were also transported to Guam Regional Medical City for treatment and care. 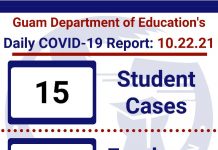