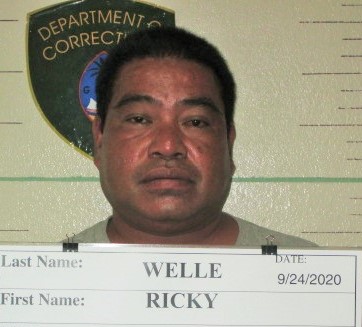 A man has been arrested after a woman, flagging down police, claimed she was kicked and punched by her boyfriend.

Police say that while they were on patrol in Dededo just after midnight Thursday, they noticed a woman was signaling for them to stop. The woman asked the officers if they were there because she had called 911 earlier to report that her boyfriend, 44-year-old Ricky Welle, had assaulted her.

The officers saw that the victim’s right eye was extremely swollen and completely closed.

The woman told police that she and Welle were drinking and then began to argue. During that argument, she says that Welle then shoved her to the ground and began to kick and punch her.

One of the officers then interviewed the defendant, who he says had bloodshot eyes, slurred speech, and had a strong smell of alcohol. Welle admitted to arguing with his girlfriend but he denied beating her up.

Ricky Welle, aka Ricky Naich, was charged with Family Violence (as a Misdemeanor).