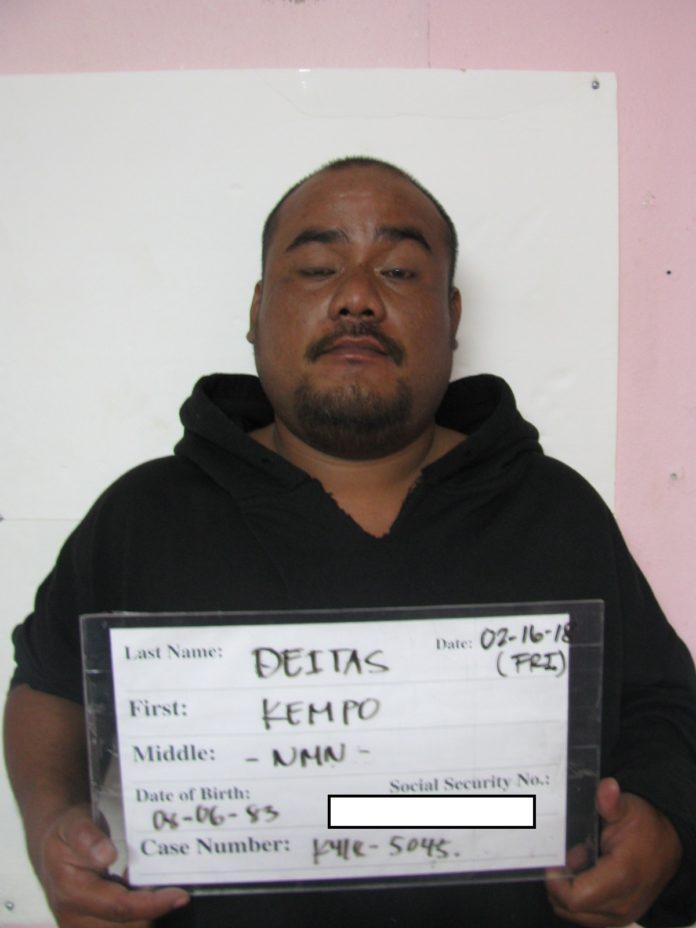 Guam – Valentine’s is supposed to be a day of love, but for one woman is left recovering from her wounds sustained on the holidays, after her estranged boyfriend kidnapped and subjected her to over 8 hours of physical and sexual abuse.

The abuse she had suffered at the hands of Kempo Deitas had already caused her to flee the island.  She only returned last month to deal with a family issue.  Last week, Deitas found her, bringing her worst fears to light.

A court complaint states as the victim was walking to a store, Deitas approached her in a red Toyota corolla, ordering her to get in the car, stating, “get in before I chop you.”

At his behest and out of fear she complied, completely unaware of what Deitas had in store. He first took her to the Toto pipeline where he stole her driver’s license, cell phone, and purse. After that he took her to Hagatna and made her withdraw $60 from her account.

With that money Deitas bought beer and cigarettes before driving her to Ypao Beach Park where the assaults began. While there, court documents state that he repeatedly slapped her in the face and ordered her to tell her friends and family that they were back together. After slapping her about fifteen times he then forced her back in the car, making a stop for more beer before parking near a basketball court in Toto.

Deitas’ assault on his victim intensified from slapping to punching her in the face about five times, strangling her and attempting to ram her head into a metal basketball pole.

But he was far from finished.

He then forced the victim back into the car and drove her to his home. The victim told police she was forced to climb into the residence through a window, a window which led to Deitas bedroom. While inside, the abuse continued as she was repeatedly struck and hit not only with his fists but with various items in the room. At one point she told police, that “Deitas struck her with four different golf clubs so hard that each one broke.”

According to the victim Deitas was fueled by rage that she was seeing someone new. The abuse continued as he began burning her with lit cigarettes, beating her on and off and sexually abusing her. The abuse did not stop until Deitas’ brother broke down the door and convinced him to leave. Once he left she was able to escape.

With black eyes, a swollen face, laceration on he hands, and multiple burns on her hand, arm and chest, she reported the traumatic events to police stating that she believed Deitas was going to kill her. Police state that they searched Deitas’ residence discovering several broken golf clubs, later taking Deitas into custody.