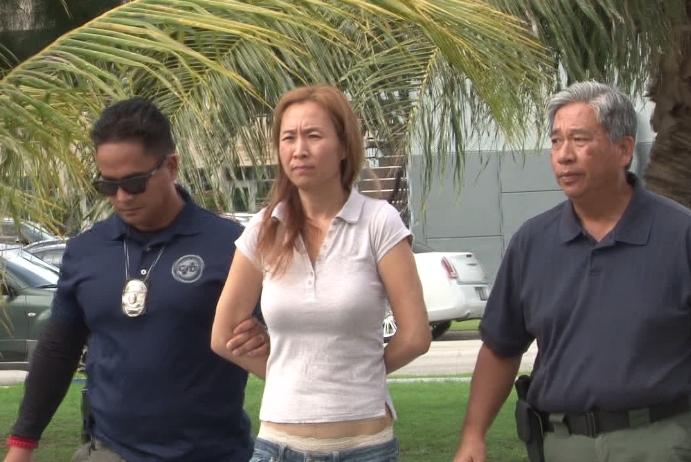 Guam Police have arrested 44 year old Yu Hua Han for punching a 10 month old baby in the face at the Micronesia Mall yesterday. Police say she was the woman seen in the video that went viral on social media.

Thousands of residents were shocked, disturbed and upset as this video of a woman punching a 10 month old baby girl at the Micronesia Mall went viral on social media.
Alyssa Esser, mom of 10 month old Alexya, said this incident took place at Funtastic Park yesterday afternoon a little after lunch as she was heading to meet with her husband Fred and son Roman.
She said, “I was heading to meet my husband and my son who were at the arcade. I was holding my daughter, next thing I know, someone from behind me came and punched Alexya straight in the face,”
As seen in the footage from the mall’s surveillance cameras, the woman’s punch caused the baby’s head to fly back.

Alyssa said, “I grabbed Lexi who fell somewhat forward and turned around and she was running away. I screamed out ‘someone just hit my baby’. She stopped and looked back at me almost to see if they were hurt. She just stopped and looked and had this strange look on her face and kept running.”

Funtastic Park employee Cole Macan told us he chased after the woman who ran towards the Food Court area. When he caught up to her and told the woman they caught her on camera assaulting a baby, Macan said she replied with “No that’s not me, that’s not me”. We asked Alyssa if the woman was aiming for her or Alexya.

Apparently, Alexya wasn’t the woman’s first target. The woman was seen following Fred and Roman around the arcade before the incident.
As a result of the punch, baby Alexya suffered a bruised eye and swelling to her face.

Alyssa said, “Honestly when I watch the video, it makes me sick. I can’t even handle watching it, it makes me cry. The reason why we decided to put it on the news was because we want her caught. We don’t want another baby hurt like this. There’s no reason to hurt a baby.”

A day after the video was posted by Alyssa, police have arrested the suspect 44 year old Yu Hua Han.
GPD Acting PIO Paul Tapao said they identified Han from the images posted on social media and with the help from the Superior Court Probation Office Agents. They arrested Han at Oriental Massage where she worked.
PNC found out that she was arrested in 2009 for a similar incident in which she allegedly stabbed a father and his baby with a knife at Lonestar Restaurant. Alyssa confirmed.

However, Judiciary of Guam Acting Administrator Josh Tenorio said, the court cannot confirm that a case in such a matter exists pursuant to Guam law on the matter of expungement.
Han was charged with aggravated assault, assault, child abuse, and child endangerment. She was booked and confined.
Fred thanked the community, police, and Funtastic Park for their support.

Man allegedly assaulted woman and threatened to burn down her house

Did you know going to the beach allows you to reli