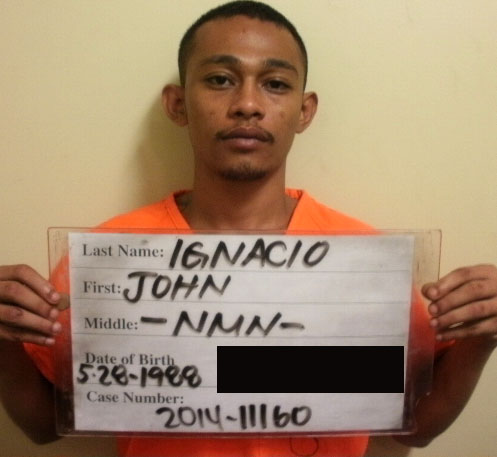 Guam –  25 year old John Eric Ignacio of Agat has been arrested in connection with the Saturday stabbing of a 23 year old woman “known to him”.

Guam Police Spokesman Officer A.J. Balajadia reports that the woman was stabbed 8 times in the back. GMH Nursing Supervisor Bill Toves says the woman is in stable condition.

Officer Balajadia says Agat Precinct officers responded to the call at 9:15am at a location on Route 2 in Santa Ana.

Ignacio has been booked and confined for Attempted Murder, Aggravate Assault, Assault on a Police, Use of a Deadly Weapon in the Commission of a Felony and Terrorizing.

The suspect is accused of stabbing a 23-year-old, chamorro, female known to him a estimated eight time in the back.

Arrested: John Eric Ignacio, m/cha/25/Agat, for Attempted Murder, Aggravate Assault, Assault on a Police, Use of a Deadly Weapon in the Commission of a Felony and Terrorizing.

The reason for the incident is unclear. The victim remains in stable condition at GMH while Mr. Ignacio was booked and confined.