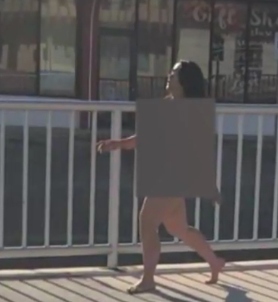 A woman casually crossing Marine Corps Drive this morning caught motorists by surprise as she was walking in the buff!

The incident took place this morning at around 8 am, according to GPD Spokesman Sgt Paul Tapao.

The video is concerning as the woman is not only crossing the road nude, but at one point almost walks right into the path of a moving vehicle. As the naked woman makes her way across the crosswalk, a red car honks and swerves to avoid hitting the woman.

The woman crosses safely before entering the park near Guam Auto Spot. It is unclear what motivated the woman to go streaking, but Sgt. Tapao says that she voluntarily admitted herself to Guam Behavioral Health and Wellness Center following the incident.

While her exposure was indecent no criminal action has been brought against her.