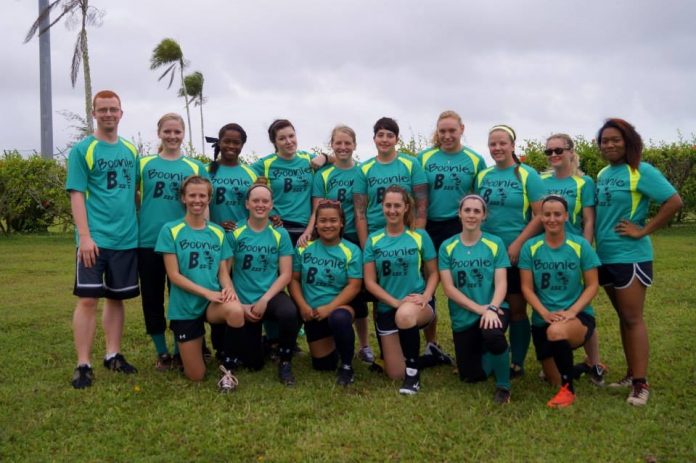 The ladies took to the field Sunday at Leo Palace Resort for opening day of the Bud Light Women’s Fast-Pitch League.

LEO PALACE – The offense would be in midseason form as the teams came out swinging.

In the season opener newcomer Blue Jays (1-0) would hold off Lady Adahi (0-1) to take a 16-11 win.  Lady Adahi would jump out to an early 6-1 lead with Jeri Taimanglo, Juliana Santos and Saig Duenas delivering rbi hits in the 1st inning.

The Blue Jays would chip away scoring five runs in the 5th inning to take an 11-10 lead.  The Blue Jays would add insurance and Tanna Pocaguie would shut down the Lady Adahi offense over the final three innings to pick up the win.  Shadow Balajadia would lead the way for the Blue Jays offense going 5 for 6 with four runs and 6 rbi to take home Strike Zone Player of the Game.   Sisters Judy, Jeri and Joshie Taimanglo had two hits each for Lady Adahi in the loss.

The Boonie B’s (1-0) would take on Bottomed Out (0-1) in the Sunday nightcap with plenty more offense.  The Bs would score ten runs in the top of the 1st inning with Megan Bennett delivering two hits and two runs in the offensive explosion.

Bottomed Out offense would get rolling in the 3rd inning plating 8 runs to cut the lead to 12-8.  RBI hits by Tomisha Roberto, Sasha Hudson and Larissa Dirige would lead the offense.

The Boonie B’s Morgan Watson would add insurance in the 7th inning with a blast to deep center for an inside the park homerun.  Megan Bennett would finish 5 for 6 with four runs, 3 rbi and 4 stolen bases to earn SZPOG as the Bs would hold on for a 17-12 win in their season opener.  Stephanie Henry went all seven innings to get the win.   Maynesha Villagomez had three hits for Bottomed Out in the loss.