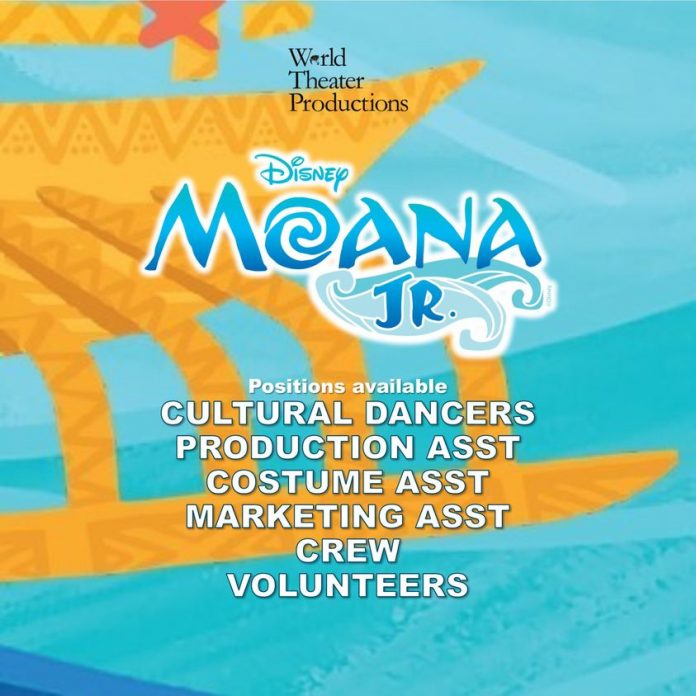 World Theater Productions, or WTP, has consistently provided a safe and empowering environment for Guam’s artists to foster and share their talents.

They aim to enhance theater production in Guam, in collaboration with professional artists worldwide, to provide local talent the professional skills to break into the entertainment field.

In most recent years, WTP Guam has brought some of the most beloved musicals to Guam’s stages, including Les Miserables, Rent, Mamma Mia, and Frozen Jr.

With the success of Frozen Jr. in 2019, World Theater Productions set its sights on producing one of the most popular musicals to date, Disney’s Moana. The production was initially intended to occur during the summer of 2020; however, it was halted due to the pandemic.

However, according to the executive producer, Margie Darcel, finding a new way to adjust was significant in providing Guam’s children with a creative outlet during this time.

“The arts are very important, I believe! Even for adults, but kids especially in this day, in the pandemic—where they can’t go anywhere,” Dancel said.

WTP currently holds a video license that permits Moana Jr. to be filmed and distributed for at-home consumption. Plans to film the musical adaptation align with COVID -afe protocols to continue with the production and are being made possible with local award-winning film directors Brian Muna and James Davis.

“We had a video license for the production. The licensing company said, well, what you can do is you can videotape the show, and you can do it as a home-video release. So we thought, okay, that’s an idea!” Dancel said.

In-person auditions wrapped earlier this week. However, School-aged actors and singers can still submit video auditions for Moana Jr. until March 31st. Online rehearsals will be conducted for safety measures, followed by socially distanced in-person rehearsals in May. The filming for Moana Jr. will occur through June 20th-26th, which is expected to be completed for distribution in early August.

This project is in association with Guam Philharmonic Foundation Inc. It is being made possible in part by a grant for National Endowment for the Arts, The Guam Council on the Arts and Humanities Agency, the Government of Guam, and the Office of the Governor.

For more details on how to get involved, contact info@wtpguam.com.