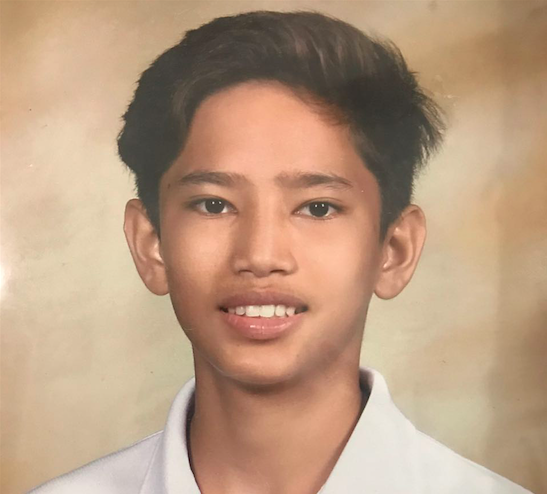 Guam – A heartbroken father shares the memories he has of his “buddy,” his 15-year-old son Xavier Akima.

A life taken too soon. This is the story of 15-year old Xavier Akima. Xavier was the youngest of four siblings who had aspirations to follow in the footsteps of his older brother as a soldier after graduating from high school. The Akimas knew from the beginning that Xavier would be destined for great things, and believed that one day he would make a name for himself as a public servant.

But their dreams were dashed when Xavier’s life was tragically cut short in a hiking accident nearly two weeks ago. His father Andrew Akima’s only wish is that everyone could have known the joy Xavier brought to the people around him. He tells PNC:

“He is of course our baby boy since the start. When we had him in our life we noticed that he was the one little child in our life that would never fuss and he was such a good child that…he will put himself to bed. He will come and get his bottle and walk his way back into the room and find his place to sleep…From the start I knew that this kid was not going to give us any trouble.”

As the young boy grew bigger, so did his compassion for others. Xavier’s father comments, “He is not selfish. He is always giving. He was always an individual who always put a smile on people.”

A loving son, brother and friend, Xavier was the family mediator and motivator. He was the reason his family found their faith again and became active participants at their parish. The amount of care that Xavier displayed for others made it easy for him to make friends. Often putting others first, if he felt unhappy he would only share those feelings in private with his parents because he wanted to make sure those around him were happy, he was a boy with a giving heart.

“I have to also share one thing he’s done. He actually saw me tear up once at a relative’s funeral and he looked at me and goes, ‘Dad, I never saw you cry.’ So I told him, I said, ‘There’s nothing wrong with expressing yourself…A tear just shows you how much you love that individual. And of course when he left, I was saying, ‘This is how you want to see me cry? Because this is not how I wanted you to see me cry. I wanted you to see me cry to see how happy I am of all your accomplishments.’ It is really difficult because he was my buddy. He would do the yard without no complaint. He will not quit until we complete it.”

Xavier was a junior at Father Duenas Memorial School and excelled in his studies, always making sure that his education came first. But this year was going to be the year he would also pursue his love for sports. His father says, “I believe that this year would have been the time that he would have started…because a lot of his friends were on certain teams.”

As a teenager, Xavier loved the outdoors, and he loved to go swimming. But unfortunately, Mother Nature would be the one to claim his life.

Mr. Akima remembers the last time he saw his son:

“As I was driving by and watched him go into the gate, he actually waved goodbye to me. I only wish that I had gave him a hug. If I had known, I would have gave him a hug, gave him a kiss.”

In his last message to Xavier, he asked him to “please be safe.”

The grief-stricken father is trying to stay strong for his family, only finding a hint of comfort in knowing that God had other plans for his son and perhaps wanted to spare him from being tainted by this world.

Today his family and friends will say their final farewell as they lay Xavier Akima to rest.

On Monday, the family’s story behind the search and rescue mission for Xavier will be aired on PNC.