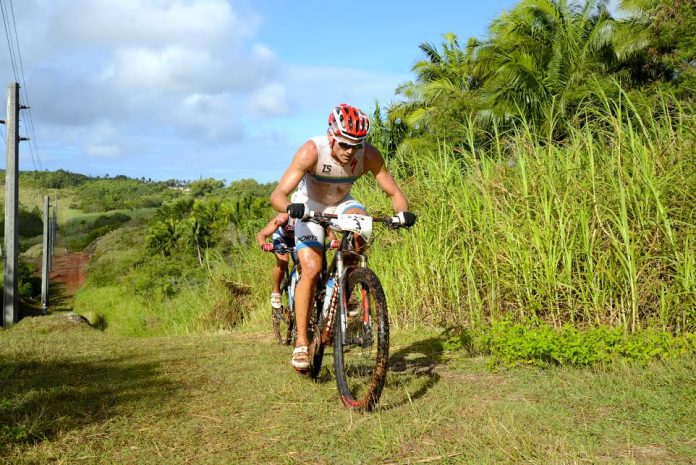 Piti, Guam –   Nearly 130 professional and amateur athletes representing 11 countries are set to compete in the XTERRA Guam Championship, presented by Guam Visitors Bureau (GVB) and PIVOT LLC, on March 29 at 7:00 a.m at Port Authority Beach in Piti, according to race director Eric Tydingco.  Eleven professional athletes, including local pros Mieko Carey and Charlie Epperson are registered for the race.

“XTERRA Guam served as my introduction to the sport of off-road triathlons in 2011,” says Epperson.  “It is an amazing landscape and community-supported event.  A must-do race for all triathletes and adventure racers.”

“Guam treated me really well last year, and I’m pleased to be returning for a second time to have another shot at winning here,” said Hugo.  “Beyond [the race], I’ll be spending two weeks on Guam in total and hope to get to know a lot of it.”

“I’m racing XTERRA Guam for the third time, and every time it is a new challenge,” said Wasle. “It’s so much fun riding through the red sand, with its flowy and technical ups and downs.  On the run, there are some surprises, like the waterfall, which is my favorite part.”

Prize money totaling $15,000 will be distributed to the top male and female professional finishers, while the top finishers in each age division will receive a qualifying slot at the XTERRA World Championships in Maui.

“The 10th anniversary of the XTERRA Guam Championship is truly a milestone,” said Tydingco.  “We have an amazing group of both professional and amateur athletes that have signed on for the event, which gives Guam lots of international exposure and really puts our island on the map as a fantastic destination for international sporting events.”

Members of the media are invited to attend a press conference featuring the professional athletes on Thursday, March 27, 10:00a.m. at the Sheraton Laguna Guam Resort.