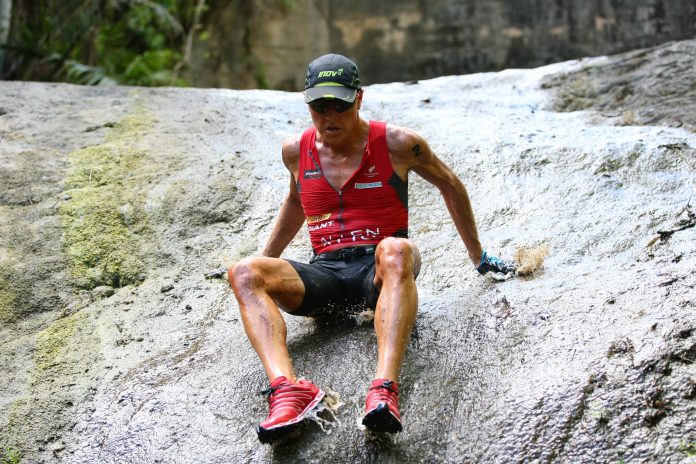 Hagatna, Guam- XTERRA Guam, now in its second year as one of only 13 world championship qualifying XTERRA off-road triathlon races in the world, held a press conference Wednesday afternoon to introduce and welcome the first time and returning professional triathletes that have converged on Guam to compete in one the most extreme and challenging races on the planet.  The professional triathletes will be vying for a piece of the $15,000 pro prize purse while amateur athletes from around the world will be fighting for limited qualifying slots into the XTERRA World Championship race, held annually in Maui.

[Photo: Takamitsu Usami “2012 XTERRA Guam Champion Ben Allen slides down a waterfall during the trail run portion of the race”]

The finely tuned endurance athletes will be competing in the final stop of the XTERRA Asia Pacific Triple Crown race this Saturday, including returning XTERRA Guam and last year’s Asia Pacific Triple Crown men’s champion Ben Allen.  Allen has been absolutely dominating in his past two XTERRA races in Cebu (Philippines) and Saipan, and is looking to finish this year’s triple crown on top yet again.

“The (Asia Pacific Triple Crown) tour races have been the best in my career,” said the 28-year-old Australian native, “It’s better than the European or the American.  The race here involves the whole community. As an athlete, I like that experience.”

“The whole community contributes to make the event a huge success and that’s one aspect that is different than Europe,” Allen added. “I will continue to endorse the island and I encourage other triathletes to come to Guam and race here.”

Last year’s female XTERRA Guam champion, Renata Bucher (Switzerland), will be looking to hold off a charging Jaqui Slack (Australia) in the women’s professional division.  Slack is also seeking to solidify her place as this year’s XTERRA Asia Pacific Triple Crown queen, as she too is coming off wins in the Cebu and Saipan XTERRA races.

“The timing for this race is good because right now it’s too cold in Europe,” said the veteran Bucher, who will be participating in her 5th XTERRA Guam triathlon.  “It’s a beautiful place, I love the people here, the area, the race course – it’s really tough,” she added.

“I had a good experience last year, it’s a beautiful island – people are very friendly and I’m  glad to be back here,” said last year’s second place female finisher Carina Wasle of Austria.  “Everything is special here, a special running course and it’s fun to slide down the waterfalls – I hope I have a good race.”

XTERRA Guam has been making a name for itself since its inception – once featured as one of the top ten courses in Triathlon magazine, and now in its second year as a fully-fledged championship event, the word is getting out amongst the pro’s about what a great race the island produces year in and year out.

“When I saw the picture of Ben sliding down a waterfall last year, I got hooked,” said first-timer Rory Downie from Scotland, who added that he knew he had to come out to race in Guam after talking with Allen at the European XTERRA circuit.

Second place 2011 XTERRA World Championship  finisher, Dan Hugo from South Africa, can’t wait to get going and said he has been overwhelmed by the hospitality Guam has shown him.

“Everyone is very welcoming and willing to take their time out to show you the course,” said Hugo, “I was really surprised that someone was free and willing on a Tuesday afternoon to go through the course with me.”

“Just getting on social media, a couple thousand people now know where Guam is,” Hugo added.

The race starts at Port Authority Beach in Piti with a 1.5 kilometer swim at 7 a.m. Competitors will then make the transition to their mountain bike for a 31-kilometer trail ride that starts in Piti and takes them up Nimitz Hill, through Mt. Alutom and the back via Mannengon Hills.

Finally, the infamous 8.2-kilometer trail run takes triathletes through the beautiful jungles of Guam, trekking through hills, rivers and waterfalls to the finish line.

Race results, photographs and information can be found at xterraguam.com.