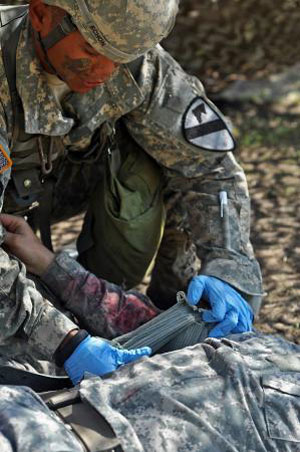 FORT HOOD, Texas – Four days to refresh and validate their skills in an austere environment. Another four days to prove they have what it takes. Twelve miles to finish it all.

More than 170 started and only 17 finished. A badge with a caduceus and cross lay over a stretcher placed above the U.S. Army on their chest.  They will now go back to their unit. Chests puffed out as respected experts in their profession.

Exhausted, sore and proud 17 medical professionals were awarded the expert field medic badge at Sadowsky Field on Fort Hood, May 20.Since its creation in 1965, the Expert Field Medical Badge has proven to be the most elusive and sought after award for medics.

“Only the best of the best earn this badge” he said.  “I was cramping out at the 10th mile on my right leg and then at the 11th mile on my left leg and I was like walk through it,” s“How bad do I want it? That was the only thing pushing me forward.”

“I feel accomplished,” said Echon who after three previous attempts has finally earned his EFMB. “I felt victory, and I felt so relieved that I finally achieved my goal. I kept coming [to the EFMB] until I got it.”

Combat medics, dentists, laboratory technicians, X-ray technicians and other medical personnel from around the Army tested their true grit during a week-and-a-half-long competition to see who qualified for the EFMB on Fort Hood, May 10-20.

Thousands of medics throughout the Army covet this prestigious award and only a small percentage of the best will earn it.

The grueling challenges these medical professionals go through is as intense as the Expert Infantry Badge, but the Army-wide completion rate for the EFMB is roughly 19 percent.

Army medical personnel have to complete the same tasks as their infantry brethren but take it several steps further.

During the EFMB, these professionals complete warrior tasks such as disassemble, assemble and perform a functions check of their M16 or M4 just like the infantrymen.

What separates these Soldiers are the medical tasks they are tested on such as performing Tactical Combat Casualty Care patient assessment, insert a nasopharyngeal airway and performing casualty evacuation procedures.

“It was very challenging,” said Mapes who earned his EFMB after two tries. “You just have to focus on one day at a time, one task at a time.”

Applicants need to have a certification in cardiopulmonary resuscitation, passed the Army Physical Fitness Test, and be qualified with their individually assigned weapon.

After four days of refreshing the basic skills and more advanced medical skills than the average Soldier, they’re faced with a written test on general military knowledge and preventive medicine.

“It validates me as a medic,” said Smith, a combat medic with 546th Medical Company “Gator Medics,” 61st Multifunctional Medical Battalion, 1st Medical Brigade. “You’re an expert in your craft. When you see a medic with that badge, you know that they know what they’re doing.”

Preparations for the EFMB begin months beforehand. Hours are spent studying manuals, completing courses, exercising and conditioning the mind and body of the medics involved.

“We did a lot of train up for the written test and then trying to get down the warrior tasks,” Smith, a Houston, Texas native, said. “We refreshed and rehearsed on the some of the lanes, but we wanted to keep that to a minimum so we wouldn’t develop any bad habits.”

At the end, 19 medical personnel started a 12-mile forced ruck march in the early hours of the morning.

Three hours to complete the last leg of their journey made even more difficult as they pushed through exhaustion and injuries.