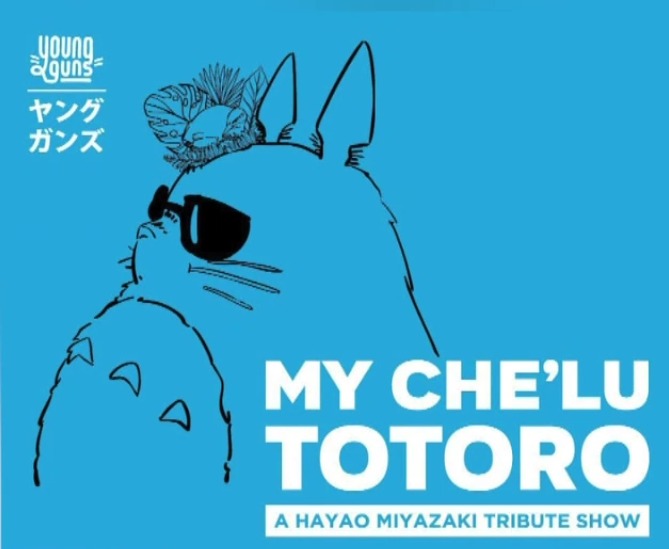 Though they normally hold art shows in places like Siesta and Caribou Brewing, the Young Guns Collective still wanted to start this year with art while still following the COVID-19 restrictions.

Because well-known filmmaker Hayao Miyazaki’s birthday was on January 5, they felt it was perfect to start 2021 by paying tribute to his work through local artists.

Nyssa Galanto, a member and artist of Young Guns Collective, said: “So we actually talked about this as a group and we were wondering if we should make it broad like all studio Ghibli or focus on Hayao Miyazaki. He did so much as an animator, director, and writer. He was involved with most of the films so it was a pretty good selection for everybody.”

Andrew Gulac, My Che’lu Totoro lead organizer, said: “It would be nice to see his work through local artists’ eyes and interpretation. It’s in the realm of Studio Ghibli and how each local artist connected with that, with his work and how he inspired them.”

Both Gulac and Galanto go further into detail about the influence Miyazaki has on them as well the other artists featured in the virtual showcase.

“His work is iconic, legendary. I don’t know, I just had this real, great feeling whenever I see his films. It’s very heartwarming. His animation technique is amazing. He also touches on environmental issues and also his lead, his protagonists, are usually females, very strong females,” Gulac said.

“Hayao Miyazaki taught me to, I think it’s in my post, that Hayao Miyazaki taught me inspiration for my everyday life. I watch his films, and a lot of the time, they’re taking public transportation or they’re just driving, or going to school. Somehow, his films make them look magical and for me, I just started to look around more and kind of enjoy my surroundings,” Galanto said.

Though there are no set dates, The Young Guns Collective has other plans coming up next week and with the new easing of restrictions, they hope that they will be able to hold art shows again soon.

You can find the My Che’lu Totoro Show case on the Young Guns Collective’s Instagram page@youngguns.collective where all of the artwork from local artists is already posted.