Guam – If there is one way to stand out among over a thousand youth athletes in the Docomo Pacific Robbie Webber Youth Soccer League, wearing bright pink socks during matches might do the trick.

Instead of wearing the usual dark-colored socks over shin guards, the entire MWR Barracudas U12B team wears eye-catching pink socks this season and many have taken notice.

“It started when I would wear pink socks to practice, then the team decided to also wear pink socks during matches,” said 10-year-old Sara Payne after the Barracudas match against the Strykers at the Guam Football Association National Training Center.

[The MWR Barracudas and the Strykers play a match in the U12B division of the Docomo Pacific Robbie Webber Youth Soccer League at the Guam Football Association National Training Center.]

Payne and King were among over 1,000 youth athletes who suited up for youth soccer league matches and braved the intermittent downpours and gloomy weather conditions.

In the U17A division, the ASC ISA Islanders Betde owned the Wings Red defense on corner kicks, winning 4-1 in a rematch of last season’s championship game. Cedric Sevilla and Austin Cardines both scored on headers off corner kicks for the Islanders. Jared Collado also scored after connecting on a free kick in the first half. The Islanders’ lone second half goal came on a Jeffrey Ho strike with an assist from Sora Recella. Gen Fudo scored the Wings’ lone goal. 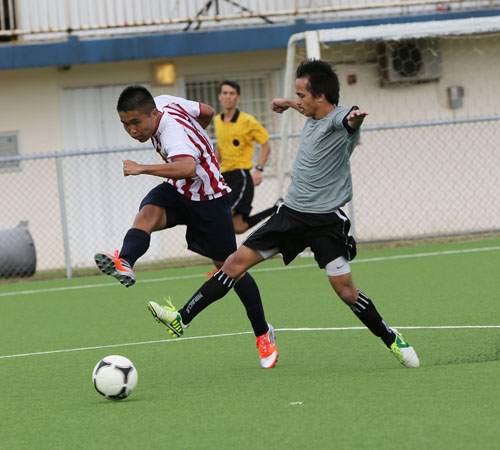 [The Strykers’ Keita Yoshida takes a shot as the Southern Cobras’ Keith Surber tries to stop him on defense in a U17A division match of the Docomo Pacific Robbie Webber Youth Soccer League at the Guam Football Association National Training Center.]

In other U17A matches, the Southern Cobras defeated the Strykers 5-1. The Cobras’ Jeric Navarro and Niko Mantanona scored their first-ever goals and teammates Keith Surber, April Talledo and Jay Cruz added to the winning team’s tally. Philip Au scored for the Strykers. Two goals each from Devin Quinata and Gideon Tyquiengco led the Southern Heat to a 5-3 victory over the Sidekicks. William Naden scored the Heat’s other goal. Kayla Kinney, Tevin Santos, and CJ Paulino scored for the Sidekicks. In the last U17 match of the day, the Wolverines edged the Wings Black 4-3. 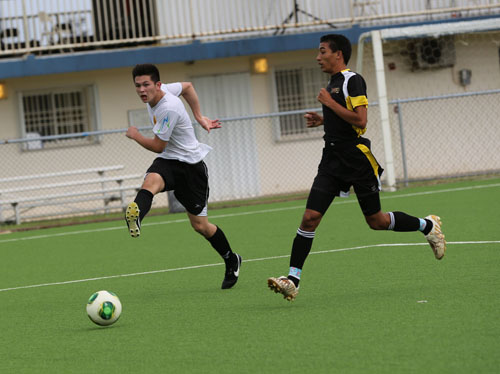 In the U14 division, the Wings won the battle of undefeated teams with an 8-1 win over the Sidekicks. Jordan Jasmin finished with a hat trick and Inochi Recella scored twice. John Anthony Cruz, Ritsuki Umeda and Masaki Spence also scored for the Wings. Matias Calvo scored the Sidekicks’ lone goal off a corner kick from Giancarlo Abril. The Community First Dededo Soccer Club dropped its first match of the season to the Strykers in a 2-1 contest. Xavier Naputi and Clayton Mitchell scored for the Strykers. Kennedy Macatuno scored Community First’s lone goal. The Islanders Betde edged Quality Distributors 2-1 with goals from Tristin Guile and Caylani Estoy. Sam Larkin scored for Quality. The Wolverines defeated the Islanders Asut 5-1. Mikey Rosario and Noah Camacho each scored twice and Randi Jo Paulino also scored for the Wolverines. Darian Chang scored for the Islanders Asut. 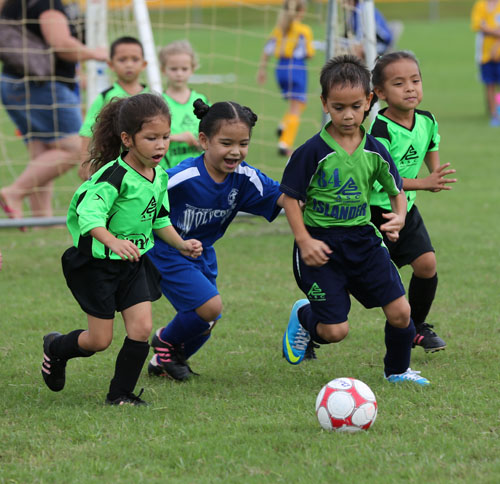 [The ASC ISA Islanders and the Wolverines play a match in the U6 division of the Docomo Pacific Robbie Webber Youth Soccer League at the Guam Football Association National Training Center.]

In the U12A division, the Islanders Betde slipped past the Wings 2-1, Quality edged Community First 2-1, and the Wolverines defeated the Tigers 4-3.