Guam – After having played baseball before, soccer is the new thing for 10-year-old Kieurstyn Camacho.

“I like passing the ball to my teammates, running on the field, and getting exercise with soccer,” Camacho said. “I hope even more new kids will join, too.”

[The Southern Heat’s Riley Jones Taijeron controls the ball on defense to keep it away from the Wings Red’s Gen Fudo behind him during a U17A division match of the Docomo Pacific Robbie Webber Youth Soccer League at the Guam Football Association National Training Center. The Wings edged the Heat 4-3.]

With the resurgence in popularity with the sport, Guam Football Association created a separate division in the U10, U12, and U17 age categories to welcome new soccer athletes to develop individual skills and get a feel for the sport. The new division also allows developing athletes to play in matches without having to compete against their peers who may have more experience playing for club teams or with Guam’s youth national teams.

“Based on past seasons, we recognized a gap in experience and skill between the top-ranked teams and bottom-ranked teams in the U10, U12, and U17 age categories,” said Robby De Guzman, GFA Youth Administrator. “We created the separate division in those age categories for the beginning teams to develop and play the sport in a non-threatening environment. It’s for the teams to have fun without having them worry about statistics and wins. It’s also for them to just come out and have fun playing the sport.” 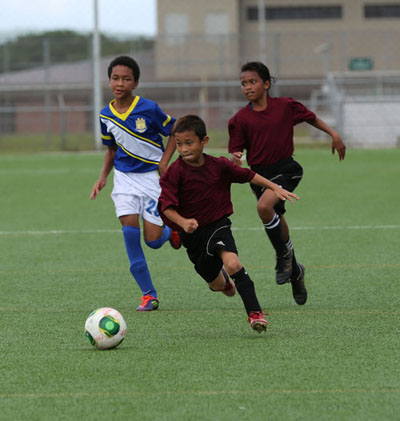 In the second week of the youth soccer league at the GFA National Training Center, defending U17 champions ASC ISA Islanders Betde salvaged a 2-2 draw with the Southern Cobras. The Cobras led 2-1 on goals from April Talledo and Donovan Reyes until the Islanders’ Sora Recella scored the equalizer for the draw. Phillip Ogo scored the Islanders’ other goal. In other U17A matches, Philip Au, Scott Ishizu, Brandon Flores, Jonah Jones, Kazuki Yoshida, Daryl Damian and Jason Onedera all scored in the Strykers’ victory over a short-handed Wolverines team, which had many of its players scheduled to take the SAT test. Derrick Cruz, Frank Wenninger, Lyle Quintanilla and Nathan Camacho managed to score for the Wolverines in the contest. Last season’s U17 division runner up Wings Red edged the Southern Heat 4-3. Gen Fudo scored a hat trick and teammate Isiah Lagutang also scored for Wings Red. Gavin Quinata scored twice for the Heat and teammate Gideon Tyquiengco scored the team’s other goal. The Wings Black later also added a victory to its season tally against the Sidekicks. 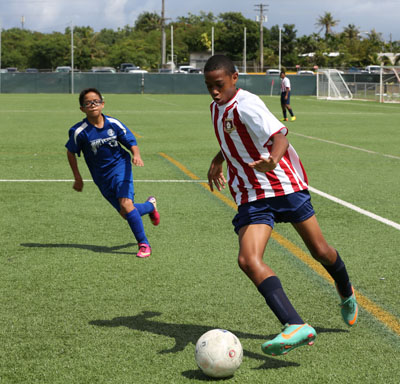 [The Strykers’ Clayton Mitchell runs with the ball up the left flank and prepares to send a cross to a teammate against the Wolverines during a U14 division match of the Docomo Pacific Robbie Webber Youth Soccer League at the Guam Football Association National Training Center. The Strykers shut out the Wolverines.]

In other matches, the Wings had a second 1-0 win in as many weeks, this time against the Islanders Betde. The Sidekicks also stay undefeated with a 6-1 win over Islanders Asut. 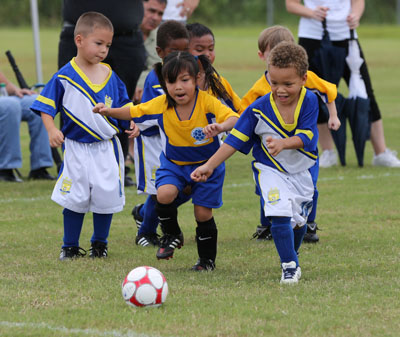 In the U12A division, the Tigers defeated Islanders Asut 3-0, the Wings edged Quality 3-2 and Community First battled to a 1-1 draw with the Wolverines. The Islanders Betde won by forfeit over the Sidekicks.