Guam – Nine weeks of play in the Cars Plus Robbie Webber Youth Soccer League will culminate in a festival-style celebration for Guam’s youngest soccer athletes at the Spring Jamboree Saturday at the Guam Football Association facility in Harmon.

In keeping with tradition, U6, U8 and U10 athletes from participating soccer clubs will engage in multiple, shortened games beginning at 8 a.m., while celebrating their developmental achievements with a fiesta-like atmosphere.

“It’s really fun for the kids,” said Anita Toves, who coached the Wolverines’ U6 team this past season. “I like seeing all the different teams coming together and participating in the Jamboree.”

Jacob Toves will be among the thousands of children participating in the Jamboree on Saturday. Toves agreed with his coach’s assessment of the twice-yearly event. The five-year-old St. Francis School student also will participate because he enjoys the sport. 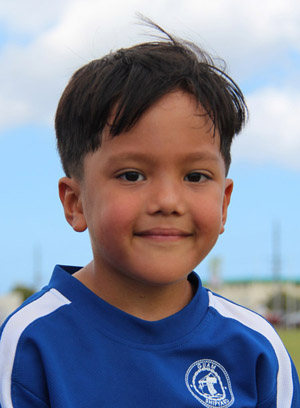 For Anita Toves, this will be her second Jamboree. For other parents like Paris Jean Blas, this will be their eighth year participating in Jamboree events.

“The Jamboree is really just a time for coaches, players and supporters to celebrate with their clubs,” Blas said.

Blas has been attending Jamboree events with her daughter, Paris Mames Blas since she played in the U6 division. The Mt. Carmel School student now plays in both the U14 and the Girls’ U17 competitive divisions.

“When I participated in the Jamboree, I looked forward to just playing, playing and playing,” said the younger Blas, who at times played two to three back-to-back games during the Jamboree. “It was great challenging all the teams again and seeing how each team improved through each season.”

The Jamboree for the younger age division teams will coincide with the final games of the competitive divisions for the spring season. GFA also will play host to the fall season for youth teams later this year. For inquiries about the Jamboree or participation in the youth league, call the GFA office at 637-4321.