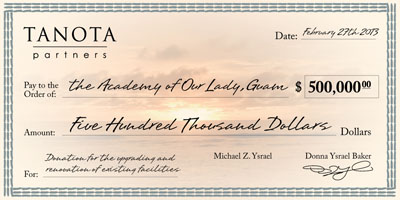 Guam – The Ysrael family Tuesday donated a total of $500,000.00 to the Academy of Our Lady of Guam High School.

The Ysrael’s charitable donation will assist the school in providing its students with a cutting edge education as well as prepare them for college and life careers. The donation will go toward the school’s STaR (Science, Technology, and Resource) Wing and other capital improvement projects. The Academy encourages students to pursue higher education, in the sciences, medicine, technology, architecture, engineering, and liberal arts.

The Ysrael daughters are graduates of the Academy and have established themselves in their respective communities as successful and contributing members of society.

Elizabeth Y. Arnold, Esq. graduated Salutatorian of the AOLG Class of 1980. Her Senior year at the Academy, she was a National Merit Scholarship Finalist and the Camarin Chapter National Honor Society President. She continued to obtain her Bachelor’s degree at Stanford University, California, and her Juris Doctorate degree from Columbia University, New York. She is currently a teacher and a full time mother.

Dr. Mariana Y. Nussbaum graduated Valedictorian of the AOLG Class of 1981. At the Academy, she was a member of the Camarin Chapter National Honor Society and held various class offices throughout her high school years. Her Senior Year, she held the position of Student Council President. She obtained her undergraduate degree from Stanford University, California, and she received her Medical Degree from UCLA. Dr. Nussbaum’ medical practice is in California.

Catherine Y. Gomez, Esq. graduated Valedictorian of the AOLG Class of 1982.  Her Senior year at the Academy she was a Presidential Scholar Finalist. She was a member of the Camarin Chapter National Honor Society and held various class offices throughout her high school years. She obtained her undergraduate degree from Harvard University, Massachusetts, and also studied two years at Oxford University, England where she received her Master’s degree in Old English Literature. She obtained her Juris Doctorate from the University of Southern California School of Law. Attorney Gomez is currently the Supervision Deputy Attorney General in San Diego, California.

Donna Y. Baker is a graduate of the AOLG Class of 1985. She held various class and school organization offices. She is a graduate of the University of Southern California. A successful business women, she is the Design Director of Tanota Partners of Guam and President of Dizzy, Inc.. Mrs. Baker is the founder of the annual Guam’s Strides for the Cure 5K race, which has been in existence of eleven years. This annual worthwhile race helps raise funds to overcome cancer on Guam.