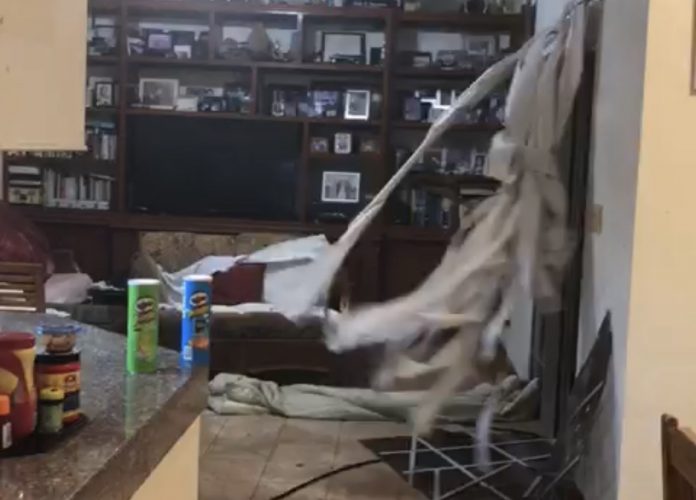 Guam – Guam dodged bullet, but our brothers and sisters up in Saipan and Tinian were not so fortunate with reports of massive and widespread destruction and horrifying stories of being trapped inside homes as the wrath of Super Typhoon Yutu is unleashed on the islands.

Saipan and Tinian residents hunkered down and took heed of all government warnings. But for most, no amount of preparation could ready them for the kind of fury mother nature would unleash in Super Typhoon Yutu.

From Tinian, News Talk K57’s Patti Arroyo interviewed local historian Don Farrell who could not contain his emotions as he described the horror he lived through.

“It was just frightening. You know, I’ve lived through a lot of typhoons but I have never experienced anything quite like this,” said Farrell, his voice quivering as he began to tear.  “This is just–our house is considered a bunker. When we rebuilt it to typhoon standards–it’s a block house. This thing can survive a war and yet at the peak of the storm, right before the eye passed over, this house was shaking as if it was an earthquake.”

With winds still howling at daybreak, Farrell says assessments were difficult to make. During the phone call, the whistling of winds could be heard in the background.

“That’s why we can’t even go outside and really assess what’s happened to us yet. We lost some windows, all of our rooms are flooded,” he noted, adding, “Trees down, all of the leaves are gone from the tongan-tongan. It was just like Guam was when I arrived in Guam right after Typhoon Pamela. Barren ground where there was deep jungle.”

Stories of windows being blown out are not uncommon. On social media, several people reported hiding in closets to seek shelter.

Up in Saipan, public affairs specialist for the CNMI Joint Region Marianas office Brad Ruszala was in contact with several residents for the duration of the colossal storm. He, too, was in tears as he described the horror residents faced even in the safest place they know.

“Folks with concrete homes, full concrete homes, who shuttered their windows or who had storm shutters, were sending messages–and these aren’t, these are direct conversations I’ve had with them–of how their storm shutters were ripped off their house,” described Ruszala as he choked on his words. “It’s just twice in three years.”

“The good thing is that we got a really good team here. We had our friends too calling us and messaging us just trapped in their house,” added Ruszala.

Satellite images show the eye of Super Typhoon Yutu appearing to swallow the island of Tinian whole with the southern half of Saipan also in its path.

Nadine Guerrero with the CNMI Homeland Security Office says officials are hoping to begin damage assessments Friday. On Thursday, October 25, damaging winds could still be felt on both islands, preventing authorities from being able to canvass neighborhoods and villages.

So far, Guerrero says they have not received any reports of injuries or deaths. But with downed phone lines and areas still inaccessible, a true picture of the aftermath of Super Typhoon Yutu is still unknown.