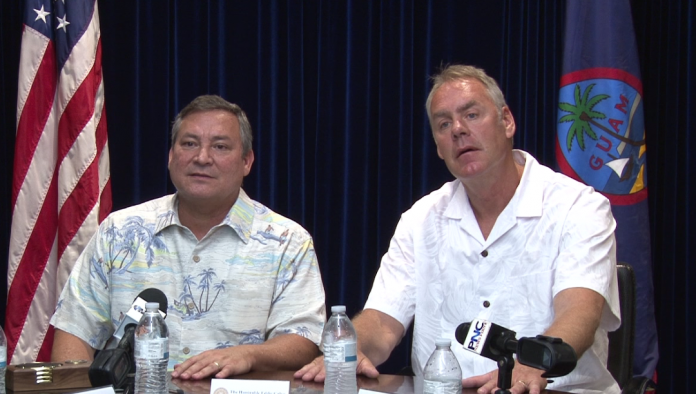 Guam – Stating that American prosperity in the Pacific starts in Guam, Secretary of the Interior Ryan Zinke, who is no stranger to the Island, is glad to be back.

“America’s Prosperity in the Pacific starts with Guam. One can argue Hawaii, but I will argue that the tip of the spear is Guam. Our position here relies on Guam being prosperous,” said Ryan Zinke, Secretary, United States Department of the Interior.

Yesterday, Zinke, Assistant Secretary Douglas Domenech, as well as Director Nik Pula, stopped by Adelup to meet with Governor Eddie Calvo and cabinet officials. While on Island, they also met with members of the Department of Defense, Interior’s National Park Service as well as Members of the Guam Chamber of Commerce. Secretary Zinke is leading the US Delegation to the 30th Pacific Islands Forum in Nauru. This delegation includes Interior officials along with Department of State and Defense officials.

During a press conference at Adelup, Zinke capitalized on the United States’ shift in priority towards the Pacific Region, specifically the vital role that Guam plays. Zinke mentioned that while Guam’s strategic location makes Guam the United States’ westernmost stronghold in the Pacific, he also pointed out the importance to make Guam an Economic and Cultural powerhouse.

PNC asked the Secretary about the current status of Guamanians and our inability to vote for President. “Well that’s been a consistent theme from the US Virgin Islands, Puerto Rico, from all of the territories that those under the US Citizenship have a voice. So we’re looking at how to do that you know, carefully, to make sure its done the right way with our representation.” Zinke stated 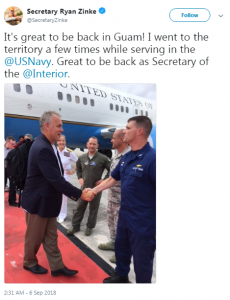 In fact, Zinke has a close connection to Guam. The Secretary recognized the important contribution that Guamanians make toward the Armed Forces, and reflected on the time he spent raising his kids on the island.“We recognize certainly as a former Navy commander, I recognize the contribution of the territories, Guam in particular, not only being a hub. I was a SEAL Commander, I had kids that grew up on Guam…unbelievable service. The veteran voice is important,” Zinke added.

Governor Calvo also mentioned that they had a constructive discussion regarding the Compact of Free Association which ends in 2023. With a looming deadline, they explore the possible options going forward. Another topic that was discussed was the Military Buildup, specifically the shortage of H2B workers. Zinke mentioned that as a former Congressman, he was supportive of visas. Zinke pointed out that Washington should heed the advice of the expert, Governor Calvo.

He also thanked the Governor for his efforts in engaging in constructive dialogue in improving Guam.